The following is the final blog post in a four part series connecting readers to archival materials from the Music Division’s Jonathan Larson Papers. Lin-Manuel Miranda’s film adaptation of Larson’s “tick, tick…BOOM!” Opened last week, and we hope that the sketches, notes, drafts and other materials highlighted in these blog posts enhance your understanding of Larson the creator, and provide new insight as you watch the film. This post was written by Senior Music Specialist Mark Eden Horowitz.

With tick, tick…BOOM!, Jonathan Larson followed the adage “write what you know.” While not exactly an autobiographical musical, the show was forged by Larson’s experiences and his persona. Names and details are changed, but from what we do know of Larson’s life he was remarkably forthright and honest in his portrayal of himself—his passions, his insecurities, even his desperation.

One of the songs in the show, “Sunday,” is an homage to the song “Sunday” from Sondheim’s Sunday in the Park with George, but it is rooted in Larson’s experience as a waiter for nine and a half years at the Moondance Diner in SoHo. In the show, he renamed it the Stardust. Either way it has near-celestial protection. (In the film version of tick, tick…BOOM! it regains its actual name.)

As far as I can determine, Larson began working at the Moondance in the spring of 1985—when he was 25— and his last day was October 21st, 1995—when he was 35. He died almost exactly three months later. So he worked at the diner for more than a quarter of his life, and for most of his adult life.

One of the more surprising items in the Jonathan Larson Papers at the Library of Congress is the extensive employee manual for the diner—it is 44 pages long. And Jonathan had a hand in writing it; he is thanked for his contributions in the acknowledgments.

There’s much to digest in the manual, but I will limit myself to two topics. First, the amusing fact that it includes wine recommendations. It seems particularly impressive that a single wine, in this case the Zaca Mesa Sauvignon Blanc, goes with such a wide variety of dishes—fruit salad, salads, omelettes, blintzes, pancakes, “chx” salad, and burgers. (Of course, the fried chicken requires a tarter pairing.) 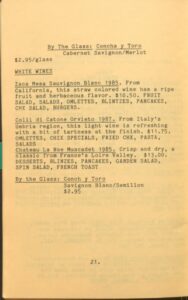 The second topic was, I’m sure, closer and dearer to Larson’s heart—Music at the diner. More than a page is devoted to the topic (section XII of the manual). I’d be willing to bet that Larson had a personal hand in writing this section. I’m a particular fan of this instruction: “(Note—hypersensitive ears prefer a tape to be changed between selections, but if you must abruptly end a song at least fade the volume). 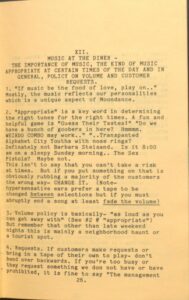 The following page goes on to state: “Waiters are encouraged to make tapes specifically for donation to the Diner…”

The owner of the Moondance, Larry Panish, said this of Larson: “Many customers came into the diner just to see him. He held court at the Moondance, and a lot of people loved him. This was not just a place for him to make a buck, but a place to share himself as well.”

Larson quit working at the Moondance because his musical RENT was finally to have an off-Broadway production at the New York Theater Workshop. On October 10th, 1995, he wrote his father a bullet-point of a letter: “Dear Dad, I quit work. Love, John.” To explain his decision more fully he wrote an article titled “Giving Up My Day Job.” There are two drafts of it in the Larson Papers (ten pages handwritten—with many cross-outs and edits—and a two page typescript), but I can’t find any evidence that it was ever actually published. (The quoted segments come from the typescript, the examples below are from the handwritten draft; they don’t always match.)

The first paragraph of the typescript reads:

After almost a decade of waiting tables at the Moondance Diner, I’ve given notice. Besides being a waiter, I’m a musical dramatist. I create rock operas. My latest opus began casting this week and is slated for a full production. The contract is almost negotiated, and I’ll be paid to write (and rewrite) for the next six months. And no matter what the outcome of the production, I’ve instructed my friends to never let me return to food service.

Back to the music played in the diner—giving us a window into Larson’s musical tastes and what influences he was exposed to—again here’s from Larson’s typescript:

I enter the diner on which Larry Panish built a small empire, and pop in the first cassette. (Being the resident musician, I rule the tunes) “Classical Stuff I” plays until nine thirty, followed by the soundtrack from “The Piano”. (unless someone complains, as they recently did, that the music is too depressing- then it’s JS Bach). Next up is the soundtrack of “Round Midnight” till eleven- when ears are ready for lyrics. “The Weavers at Carnegie Hall” goes on unless that rich dude who hates it is here. Soon, we’re on to Liz Phair or Nirvana or a home made mix- perhaps, “Dolphin Safe” (made in honor of Earth Day) “Get Yourself A College Girl”, or “Time Marches On- Parts I and II 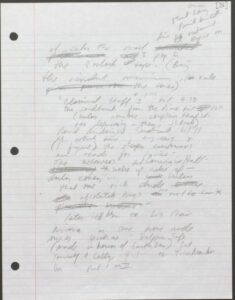 A couple of paragraphs further on Larson explains his reasoning for working as a waiter:

Instead of writing jingles or playing piano in a bar, I chose a job that I felt kept me honest and didn’t divert my attention from my true calling, creating rock operas. (Maybe that’s why Philip Glass drove a taxi…)

He closes with the hope/plea that: “If only you two hundred and fifty thousand or so customers of mine would buy a ticket to my opera…” They did. 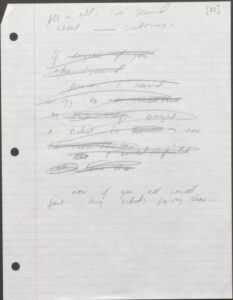