The following is part of a series of four blog posts connecting readers to archival materials from the Music Division’s Jonathan Larson Papers. Lin-Manuel Miranda’s film adaptation of Larson’s “tick, tick…BOOM!” opens today. We hope that the sketches, notes, drafts and other materials highlighted in these blog posts enhance your understanding of Larson the creator, and provide new insight as you prepare to watch the film. This post was written by Music Division Archivist Janet McKinney.

How does one turn one’s own life into a work of art?

Although it is being released as a film in 2021, the clock for tick, tick…BOOM! started ticking more than 30 years ago.

Throughout the mid to late 1980s, Jonathan Larson worked feverishly on his original musical Superbia, hoping to bring a new aesthetic to Broadway—one that would incorporate contemporary popular music. To support himself, he also waited tables at the Moondance Diner and further developed his compositional chops by writing music for cabarets, as well as dance pieces and underscores for books on cassette. Larson received a Richard Rodgers Development Grant for Superbia, but his tireless efforts were never rewarded with a full-scale production. In late-1989 he turned his focus to an autobiographical endeavor, the one-man show he first called 30/90so named for the title song and subject: turning 30 years old in the year 1990. It chronicled Larson’s struggle of working on Superbia While trying to navigate friendships and love at a pivotal point when he would decide whether or not to continue to pursue a career in the arts.

After several months of writing, Larson’s rock monologue premiered September 6-9, 1990, at the Second Stage Theater, under the title Boho Days. It was this production that attracted the attention of fledgling producer, Jeffrey Seller, who would go on to produce Larson’s musical RENT. Larson continued to rewrite and hone the show over the next year, and changed the title a third and final time to tick, tick…BOOM! He performed this revised version of the show at the Village Gate on November 18 and 25, 1991. Larson reprised his performance at the New York Theater Workshop on December 4, 1992, and again at the NYTW O Solo Mio Festival on April 19, 1993 During this time, he also attempted to package the songs together as a pop album and recorded a demo of it for Geffen Publishing. 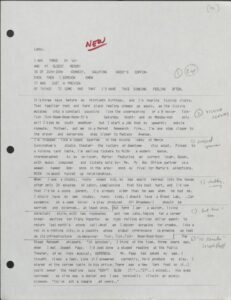 In its original incarnation, the show opened with a short rap in which Larson recalled his oldest impactful memory—the funeral of John F. Kennedy. He divided the script into beats, providing key words to jog his memory for performance—a practice he would continue through other iterations of the script. Numerous songs—some new, and some recycled from other projects—were added and dropped: “Children of America,” “London Faces,” “Pioneers of the Extreme,” and “Valentine’s Day” (a song previously written for the revue Prostate of the Unionand which Larson would later try to place in early versions of RENT).

Although he rewrote and reworked the script over and over again, most of the core musical numbers remained the same. However, at some point between 1991 and 1993 (we do not have a program for the 1992 performance), Larson replaced “Debtor Club” with “No More.” Both songs served the same purpose, to illustrate the compelling lure of a stable corporate job. “No More” provides a stark comparison between how Jonathan lived as a struggling artist and the luxury of his friend’s new apartment. On this lyric sheet, Larson contrasts the qualities of “brass door knobs that feel good in your hand” with a “bathtub in the kitchen.” 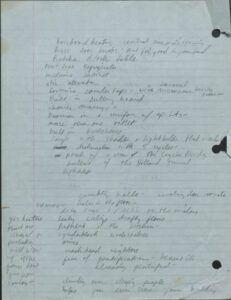 After Larson’s death, his friend and producer, Victoria Leacock, worked with playwright David Auburn to restructure the monologue into a full show with three cast members playing the roles of Larson, his best friend Michael, and his girlfriend Susan. This Off-Broadway production opened in 2001, and it included an interpolated song from Superbia“Come to Your Senses,” for Susan.

The 2021 film version brings yet another life to tick, tick…BOOM! In addition to restoring two songs that were cut from the Off-Broadway adaptation (“Swimming” and “The Play Game”), scenes that Larson wrote for his monologue were also added back in, with adjustments. One such scene depicts Larson presenting Superbia at a musical theater writer’s workshop where he is given feedback from a man named Robert Rimer. The film uses that man’s real name, Stephen Sondheim. In other cases, minute details that Larson wrote inspired a new creative direction. In a very early draft, Larson stated that the dress featured in the song “Green, Green Dress” was a commission from his fashion designer/waitress friend Carolyn. In the film, the song is not sung (although the music is heard in the score), but Carolyn is a fully developed character who works with Larson at the diner.

Andrew Garfield portrays Larson as an artist who is bursting with tenacious, frustrated energy—an energy that can almost be felt on the pages of Larson’s personal papers. The lyric sketches, script drafts, and demo recordings show his creative process. The passion, perseverance, and dedication to his work can be seen in the artwork for fliers and invitations, research materials, questionnaires, sign-up sheets for mailing lists, stage diagrams, prop lists, invoices for instrument rentals, theater bookings, the hiring and communication with musicians, letters looking for investors/producers …and in one of the many questions Larson poses to himself:

How does one turn one’s own life into a work of art? 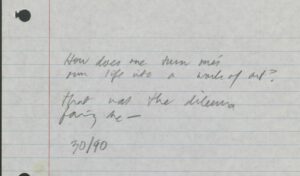