The UK Pantomime Awards were held on Tuesday 19th April at the beautifully refurbished Trafalgar Theater in the heart of London’s West End celebrating the achievements of the 2021/22 season where Venus and Producers had to battle to keep the shows on as Covid symptoms affected cast, crew and front of house staff. It was a magnificent opportunity to share stories and applaud successes with all the major Pantomime Producers and many of the in-House shows being represented there. The main sponsors Butlins added to the fun with four redcoats on the red carpet and assisting in the Awards.

As was said early and often this ceremony was a celebration of Pantomime and all the nominees were winners, but nothing can surely beat having your name called out and going on stage to collect an award.

First up were Duncan Burt and Nic Gibney as the winners of the Best Ugly sisters at the Theater Royal Bath to receive their Award from the wonderful grandee of Pantomime Nigel Ellacott and the brilliant Dame and Director, Andrew Ryan. 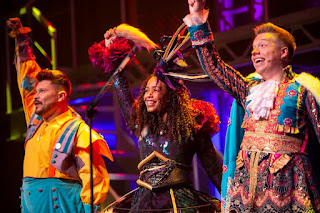 Clive Rowe, another of the great modern Dames presented the Award for Best Dame of the year to Morgan Brind, for his performance in Sleeping Beauty and the Derby Arena.
Max Fulham and his cheeky monkey Gordon nearly stole the show with a brilliant short routine as they presented the best Villain to Rolan Bell for Aladdin at Cambridge Arts Theatre.
The Best Choreography Award was presented by Bernie Tiller, grandson of the Tiller Girls founder with one of the current girls Becky Bassett adding some real glamor to Jonny Bowles for his work on Goldilocks and Three Bears at Grand Opera House in Belfast.
The Carmen Silvera Award for Best Mythical Being (in recognition of the Allo Allo star) was presented by Vicki Michelle to the amazing Alexandra Burke for her role in Aladdin at Manchester Opera House and she sent a lovely message from her tour of Joseph and the Technicolour Dreamcoat.
This year there was a Digital Award recognising those who made their shows available as a digital stream either as a made for streaming or an adapted capture of a live show with the winner being Jack and the Beanstalk from New Wolsey Theater in Ipswich.
Another special moment was when Scott Mitchell presented the Barbara Windsor Award for Best Principal Boy to Dominic Sibanda for Sleeping Beauty at Lyceum, Sheffield.
The big winners of the night were Robin Hood at Everyman Theater in Liverpool for Best Panto (under 500 seats) and Best Musical direction, Jamie Noar; Aladdin at Lyric Hammersmith for Best Pantomime (500-900 seats), Best Script, Vikki Stone and Best Supporting Artist, Kate Donnachie and Jack and the Beanstalk at Marlowe Canterbury for Best Panto (over 900 seats) and Best Direction, Paul Hendy.
There were some special recognition rewards to reflect the ethos of the new charity in celebrating tradition, innovation, and achievements. These went to Justin Fletcher and Paul Morse for their brilliant comic partnership at the Hexagon Reading including a fabulous version of the Balloon ballet, the Showstoppers of Justin Brett, Susan Harrison, and Ali James at Corn Exchange Newbury for their improvised songs each show and to the wonderful Joe Tracini for his promotion and representation of Mental Health in the Norwich Theatre. Nigel Ellacott returned to the stage at the end of the show to collect Outstanding contributions to Pantomime for his performances as Ugly Sister and Dame since 1974 and his work promoting and protecting the traditions through Itsbehindyou.com
The show featured Gracie McGonigal reprising her song from the Lyric Hammersmith show, a tribute to Understudies and Swings who kept so many shows going during the season, the very naughty Myra DuBios in a hilarious version of “I know him so well” and the Butlins production of Goldilocks and the three bears with Michael Batchelor. 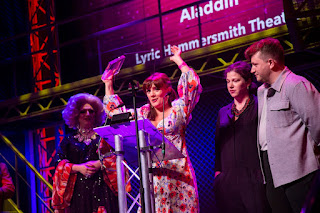 The UK Pantomime Association has been to celebrate Pantomime by developing the genre’s rich past, engaging with contemporary practice, and inspiring the future. All activities of the Association are oversighted by a group of Trustees who, collectively, have significant experience in overseeing high-quality initiatives within Pantomime, Education, and the Arts. Trustees of the newly formed Association aim to bring together those who have an interest in Pantomime, both amateur and professional, and share resources and expertise. The UKPA however is not just about the awards, but also seeks to establish regular events and opportunities to learn more about the history, practice, and tradition of panto with plans to introduce a program of conferences and outreach events.

As a national treasure, Biggins, who masterly compared to the show said at the end, We will have to do it all again next year won’t we!