Having had to close after just two previews in 2020 due to the pandemic, Aria Entertainment’s Zorro the Musical has finally had its long-awaited opening at The Charing Cross Theater with director Christian Durham. From its seductive and passionate story to its swash-buckling and heroic coups, Zorro is simply a feast of vocal triumphs, hypnotizing dance numbers and thrilling adventure.

Based on the 1919 fictional character Zorro by American writer Johnston McCulley, Zorro, set in 1805, telling the tale of Diego, a young wealthy caballero, who is sent from his home in California by his father Don Alejandro to school in Spain. His older and incredibly jealous brother Ramon, destined to become captain of the army, is enraged as he believes it is he who should be the academic. As ten years passed, Diego abandoned his studies to join a band of gypsies and perform in the backstreets of Spain. Simultaneously Ramon has taken over from his father who he pronounced dead and is acting a tyrant, destroying his home town with cruel and brutal ways. When Luisa, Diego’s childhood sweetheart locates him in Spain, she convinces him to return to California to save the people from his brother. The gypsies accompany them, including Inez, Diego’s lover, sparking an escapade of fervour and rebellion. 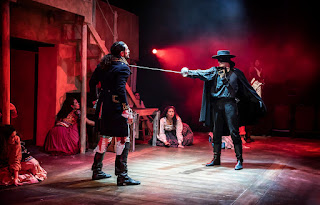 The beauty of the Charing Cross Theater is its ability to transform the space in a plethora of ways. Zorro is an incredibly immersive, a traverse stage with the audience submerged in the action. The set is simple but exceptionally effective; a sizzling hot pueblo in London’s West End, transporting you to 19th century California effortlessly. An excellent view is guaranteed wherever you are sitting in the auditorium, thanks to the intimate setting and enveloping atmosphere.

The actor-musician aspect of the show just adds fuel to the already fiery spectacle. The ensemble is made up of vocally fabulous, elegant dancing and musically talented individuals, many of which provide sensual and uplifting musical accompaniment. From on-stage guitar playing, trumpet solos and romantic violin serenades, the audience are truly consumed by the zealous and enticing drama unfolding in front of them. This goes hand in hand with the intense and immeasurable flamenco choreography which deserves a 5-star review in itself; a celebration of spell-binding, passionate and enchanting movement; with outstanding solos from Ajjaz Awad. 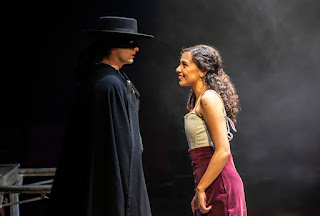 This cast was stupendous, boasting diverse talents, stage presence and executing huge musical numbers with endless energy and vigour. Now of course the core of this story revolves around the characters Diego and Ramon, played by Benjamin Purkiss and Alex Gibson-Giorgio, who encapsulated the strong, stubborn characters with such ease, but this review has to be dedicated to the women of this show . Paige Fenlon, who has just finished her stint as cover Vivian Ward in Pretty Woman, has proved once again her leading-lady status with her captivating performance as love interest Luisa. From her immense vocal range to her headstrong aura, she carries off her character with such genuineness, that she has the audience on her side from the second she makes her debut.

The last word has to be given to Phoebe Panaretos who plays the gypsy sensation, Inez. She utterly stole the show from the moment she entered the stage with her exceptional comic timing, enthralling charisma, powerhouse vocals and entrancing presence. No casting was more apt than this one, fueling the stage with vivacity, power and authenticity.

Zorro at The Charing Cross Theater is playing for a limited run until 28th May. If you are going to see anything in London this Spring, you would be a true fool to miss out on this gem.