On a rainy Tuesday evening I ventured out to Orange Tree Theater to see Tom Fool by celebrated German playwright Franz Xaver Kroetz in a translation by Estella Schmid and Anthony Vivis. Although, one of the most performed playwrights in his homeland, less frequently do we see his work staged in the UK and it is a welcome addition to the Orange Tree Theater’s Recovery Season’s programming.

Kroetz works with a style of realism, that at its core, comments on social regime caused by a capitalist system prevailing in the 1970s, with a focus on the emotional toll it takes on families and individuals. He also has a nuanced ability to capture lightness and humour within moments of despair and defeat when dealing with something bigger than any one person.

In Tom Fool, despite the grim anxiety experienced by his characters due to their working-class status, each search for and dream of freedom and happiness in their lives. It marks itself as one of Kroetz most iconic plays and although written for an audience over forty years ago, Tom Fool resonates all too strongly with the economic stronghold capitalism still has on families of today. 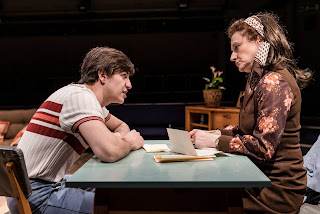 The play follows the lives of Martha (Anna Francolini) a housewife, her husband Otto (Michael Shaeffer) an ambitious man who wants more from his life as a fitter on BMW’s factory line, and their adolescent son Ludwig (Jonah Rzeskiewicz) who wants to work despite encountering difficulties finding an apprenticeship, thus forcing him to remain idle at home with his parents. While Otto feels trapped by his circumstances, Ludwig feels trapped by his family and in contrast, sees going into the workforce as freedom. Martha seeks freedom from independence after playing the all too common role of a woman trying to ease the suffering of the men around her. There is no satisfaction in this play but resilience (resembling stubbornness) through each of their quests for happiness. Ultimately, however, when one is no more than a cog in a larger machine the dissatisfaction only leads to hurting each other.

The intimate staging of the play invites the audience directly into the three characters simple life consisting of a transformable domestic set-up. As we watch them watch television, peel potatoes or dream of becoming the world champion of model plane gliding, director Diyan Zora milks Kroetz use of pregnant pauses for all their glory and fills them with silent anxiety that morphs into humorous and dramatic resolutions about the disappearance of a ball point pen or emotional and physical destructive actions. Occasionally, this held silence is used to the point of excess but all three performers are well equipped to work with the weight of these moments.

Francilini as Martha offers a stoic and moving performance as a woman in a time where the prospect of leaving an established domestic life is more possible than in previous generations. In a turning point of the plot when Otto, with complete disregard for the home Martha has made for him says “I always thought I would be happy when I grew up…” Francilini handles her performance with dignity. Shaeffer as Otto manages to embrace and balance the unlikable qualities of his character with the portrait of a man who is a victim of circumstance. He has the challenge of delivering a series of unforgivable violent moments physically and psychologically and does so with conviction. In contrast also manages to produce moments of pure humour. Rzeskiewicz as Ludwig offers a captivating performance in his role of a young man of few words yet one who extrudes ambition and a desire to know himself better. Rzeskiewicz captures the difficult time when adolescence is transitioning into maturity. 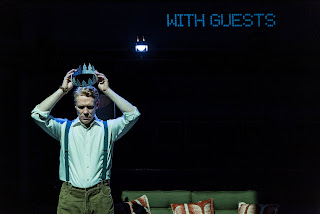 The simple staging and episodic scenes require a series of quick changes and transitions that work smoothly and in and around the extreme realism there are stylistic moments of object manipulation and the transposition of space that are performed with finesse. This requires acknowledgment of movement director Chris Evans. The same can be said for Intimacy coordinator David Thackeray who would have had to work on the treatment of several comforting sexually explicit scenes and nudity, all of which powerfully sit within the narrative.

At times the play borders on melodrama, however, this can be forgiven in the context that even the most mundane of lives has a way of stirring up, in theory, avoidable drama. Overall this production of Tom Fool offers a timely and honest account about the pursuit of happiness in a life dictated by capitalism.