The Watermill Theater continues to set extraordinary standards in creativity and innovation in the small intimate venue while being one of the most pleasant places to go to in its perfect setting by the mill stream and willow trees. When the Government closed Theaters on 16th March 2020 it was the opening night of The Wicker Husband and we have had to wait two years for it to be remounted. The Producers & creators must have despaired that their musical, which has had a long and challenging development phase, might never blossom into the show they dreamed of. That wait is finally over and this beautifully conceived & elegantly staged production with its delightful musicality and the joyous cast is set to take the UK by storm. It is one of the best new productions I have ever seen at The Watermill (or anywhere) and deserves to be seen in the West End like The Watermill’s previous hit musical Amelie.

It is a folk opera and a morality tale with hints of Pinocchio and the Wizard of Oz. It weaves together so many wonderful production elements to create an almost perfect show. The puppetry of the Wicker Husband & Basket the dog is magical, as good as you will have seen in War Horse and Animal Farm. You connect emotionally with these wicker creatures and the scene with the Husband lying on an “operating table” is so powerful you completely forget it is a puppet. The rural setting is brilliantly created with the large Willow tree set against the bullrushes and each interior location is ingeniously set with a simply decorated chair setting the Inn, the Cobblers shop and the Tailors and a ladder, the Ugly Girl’s cottage. The lighting is exquisite creating the rural atmosphere and perfectly picking out characters’ moments of isolation. The Watermill’s obsession with Actor musicians works a treat this time integrating them into action appropriately but keeping them most actively in vision in the forestage wings under the quiet leadership of Musical Director Pat Moran. 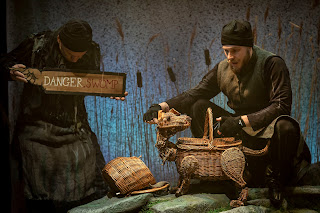 The heart of the show is the wonderful performances of Julian Forsyth as The Old Basketmaker, Gemma Sutton as the Ugly Girl and George Maguire as the voice of The Wicker Man. They pack such passion and emotion into their delivery with so many excellent songs. Forsyth opens the show with the oft reprised folk ballad “Once upon a withy” creating the earthy mystical air that dominates the show. Sutton is magical as she talks to the old Willow tree, falls believably in love with the Wicker Man in “I were made to hold you” and then plentifully soars in the wistful “Have you seen my husband?”. The Wicker Man designed by Finn Caldwell is brought to life by Maguire with Nisha Anil and Sebastian Charles so that he moves and reacts perfectly to the characters around him. It is mesmerising.

The impact on the lives of the “idyllic village” of the Wicker Husband is shown through the changing behaviors of the Tailor and his wife (Jack Quarton and Davina Moon), the Cobbler and his wife (Joe Alessi and Angela Ceasar) and the Innkeeper and his wife (Jonathan Charles and Claire- Marie Hall). We see them as loving couples, warring rivals and in comical human parodies. Their songs together “Diddely I-Ten Day”, “Will ye lend me a suit” and “T’aint Right, T’isnt Natural” are delightful witty comic ensemble pieces and are brilliantly executed. 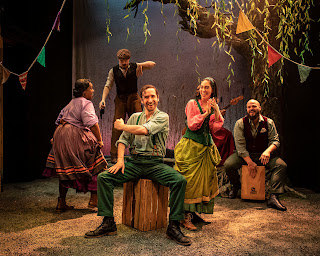 Director Charlotte Westerna, Designer Anna Kelsey and Choreographer Steven Harris, all worked together on the Southwark Playhouse clever streamed magical show of The Sorcerer’s Apprentice during the lockdown and bring their creative teamwork to this show. The movement of the cast is very well managed, and the space is used extremely very effectively, never overcrowding the stage and using the auditor’s entrances from theium appropriately. Once or twice action sat on the floor of the stage is lost to the back half of the stall’s audiences but it is a momentary loss of visibility. However, they have done a masterful job bringing Rhys Jennings book and Darren Clark’s music and lyrics to the stage. No doubt Ursula Wills, whose short story written in 2011 is the basis will be amazed at what has been achieved when she gave them permission to “Use it, Beat up, see what comes out of it”!

This is a story with real heart and meaning. In a world ravaged by war & global warming and dominated by a superficial obsession with images & messages on social media, it is a pleasure to see a story with powerful reinforcement of natural good triumphing over evil intent and a message that makes a person beautiful is their soul and caring attitude rather than their external appearance. Gemma Sutton embodies that spirit with a strong engaging stage presence and joyous energy and together with this wonderful cast and creative team delivers an absolute treat that must surely delight audiences beyond its Berkshire birthplace.

A must see…I want to see it again already and that is rarely a feeling I get when I leave a theater.