One of the great pleasures of going to see live theater is to witness the alchemy of the production process in bringing a story to the stage. The blending together of the essential elements of a strong story, magic and illusion, music and dance and the creation of believable characters when it works creates emotional engagement and assists in the suspension of disbelief to transport the audience into a different world. The pedigree of the creative team behind this touring version of the Lion Witch and the Wardrobe promises a great deal so it was with great anticipation that we caught up with its UK tour in Woking.

Director Michael Fentiman was the man behind the extraordinary Watermill production of Amelie and recruits a handful of that cast to this show. Chris Fisher supervises the illusions in the wonderful Harry Potter and the Cursed Child and in the latest West End hit Back to the Future astonishing audiences with the magical effects. Toby Olie is the puppetry director on the current amazing tour of Animal Farm and on the Watermill’s latest incredible production of The Wicker Husband. The creative talents of these three are evident in this show but whether because of budget limitations or the challenges of weekly touring, the production falls short of their earlier successes. It is still an enjoyable and entertaining show, very suitable for young audiences and GCSE students but I hoped for more. The story lends itself to their skills. C.S. Lewis’s Chronicles of Narnia, a seven-book series written between 1950 and 1956 about four young people battling evil in a magical world even sounds like the Harry Potter series some fifty years later. The central figure in the first book of the series is the powerful lion Aslan who recruits the assistance of the four Pevensie children, evacuees to the home of the Professor, to defeat the White Queen, Jadis. The resurrection of Aslan is symbolic of Christian stories of Jesus Christ. It is a magical story on the page, so the challenge was how to bring on alive on the stage.

They seem to have decided to use an open stage and reveal the theatricality as we can see into the wings and the fly tower ropes throughout, and the flying wires and counterbalance lift are clearly visible when used negating any chance of illusion. Cast members carry on statues and lamps to act as walls to interiors or are dressed in white robes to symbolize the Winter landscape. Fentiman describes it as the stylized language or framework for the production but while it enables an elegant flow there is no mystery or wonder at what we are seeing. Even in the main illusion of the show, the resurrection of Aslan, we can see the proforma shape being carefully set so it is not a surprising delight when he disappears. The large cylindrical platform at the rear of the stage in the backcloth from which the action is sometimes observed appeared to have a technical fault as the disc covering it got stuck on more than one occasion leaving it half-open.

The puppetry is not as prominent or as “real” as in Animal Farm and The Wicker Husband. Curiously Aslan is portrayed as a two-legged lion while voiced by an actor standing alongside it as a detached character. It never becomes the focus of our attention, simply a symbolic presence. The small cat (136 years old) that bounces around the Professor’s house has no legs either although the puppeteer does manage to give it a good presence. It is up to the large cast of actor-musicians to tell the story and create the mystical world through their words and actions, and they do their very best to deliver. 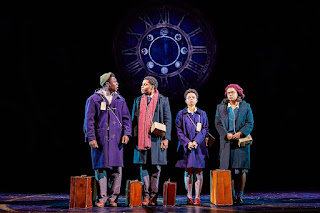 The Pevensie children are played by four actors (with young playing ages) Robyn Sinclair, Karise Yansen, Shaka Kalokoh and understudy Michael Ahomka-Lindsay as Susan, Lucy, Edmund, and Peter respectively and they effortlessly create the different personalities of the children from their first appearance nervously waiting for the evacuation train (a really effective small model). The Professor is played by Jonathan Willis portraying easily the good, humoured intellectual who knows more about the Wardrobe than he lets on.

In Narnia, we meet the brave Faun, Tumnus (understudy Shaun McCourt), the comical Beavers (Christina Tedders and Sam Buttery) and of course the White Witch herself played with an upright majestical air by Samantha Womack as well as a host of other animal creatures played by the Ensemble. The Voice of Aslan is provided by Chris Jared in a shaggy fur coat, and he becomes the focus of our attention rather than the puppet version.

The music by Benji Bower and Barnaby Race are pleasant northern folksy tunes after the initial period setting “We’ll meet again” that help tell the story and are well choreographed by Shannelle “Tali” Fergus integrating the actor-musicians into the action. They are all delivered with energy and clear vocals. Indeed, it is hard to fault any of the performances from a very good cast. 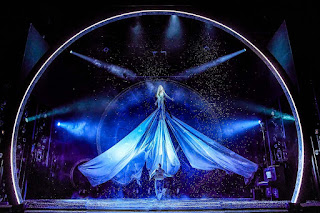 This was an acclaimed show when it started in Leeds Playhouse in 2017/18 and The Bridge Theater in London in 2019 and has been remounted for the UK Tour but for me despite the best efforts of the large touring cast some of the magic (as well as some of the running time) has been lost in the process. It is still a joyous entertaining show that will delight young audiences and a pleasure for older folk who read the books as a child, but it promised more and by comparison with some of the Creative team’s other work fell short of my own high expectations. But if you are studying the books for GCSE or have a fond recall of reading them go see the show and support their endeavor and Live Theatre.