This is the fortieth anniversary of the Mill at Sonning and Sally Hughes’s program for the year reflects past successes in programming the unique dinner theater venue. Recent successes of the musical Top Hat and the delightful immersive show Still Life return later in the year, and Ray Cooney’s Funny Money is staged this autumn, the thirty-third Cooney comedy season at the venue alongside Hughes herself directing after a five-year gap Neil Simon’s Barefoot in the Park in the summer. Brian Blessed another regular at the venue directs Busman’s Holiday in April. In 2017 they staged Peter James’s Dead Simple horror thriller and so in 2022 another of his books has been adapted for their stage by Shaun McKenna, The House at Cold Hill. It is clear that she knows her audience and the mix of shows they expect to see each year that will keep them coming back to this delightful venue.

The House at Cold Hill is however a fresh challenge as the horror genre requires some special stage effects to create a shocking thriller that keeps the audience on the edge of their seats. The masterful Woman in Black has set a high standard with genuine jump shocks that keep thrilling the audience and the technology in illusions on such shows as Harry Potter and the Cursed Child, Back to the Future and Ghost at the Piccadilly in 2011 show what can be achieve on bigger budgets. The challenge, therefore, is how to create the sense of a haunted house in a smaller venue where the audience is so close. The Mill’s solution is to rely on the sound and special effects designer Graham Weymouth and some projected images and light effects. If you can’t create spine chilling effects with this genre the temptation must be to go for a comic send-up along the lines of Noel Coward’s Blythe Spirit with Madam Arcati, the clairvoyant. This production falls between the two ends of the spectrum being neither played fully for the horror nor for laughs although there are occasions where the audience reaction was to giggle rather than gasp. 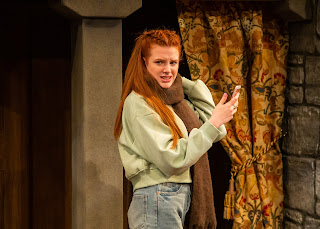 We learn in the opening scene that the previous occupant was mysteriously killed in 1986 so when the new owners, successful married couple Ollie (Matt Milburn) and Caro (Madeleine Knight) arrive many years later we know to expect some strange goings-on. Their daughter, Jade, (Hannah Boyce) full of teenage attitude, is the first to sense another presence. For a moment you wonder whether this is a genuine Ghost story or simply the local residents playing a rather unpleasant prank on their new neighbors. A succession of potential pranksters arrives each with their own version of ghost stories about the house to reinforce this suspicion. Phil the Builder (Kevin Hand), Chris the local techie and ghost watcher, (Dan Buckley), Fortinbras, the nervous vicar (Harry Gostelow) and Annie, the cleaner and shopkeeper (Debbie McGee in a glorious red wig to cover her usual blonde hair). All of them speculate about who is Lady Matilda (Laura Schult in a long gray wig). 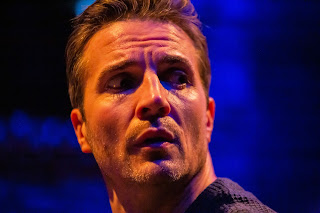 As with other Peter James stories technology features in the stories with Alexa strongly becoming another voice in the story, a box full of Ghost detection devices, mobile phones and a laptop all playing key roles in the storytelling and firmly setting the story in the 2020s. As always at the Mill, the impressive set by designer Alex Marker constructed and painted the house and has the feel of an ancient house although perhaps not as dilapidated as such a long period of inoccupation would suggest.

Director Keith Myers marshals the elements effectively although at times the pace drags (especially in the first half) with too much exposition between the set-piece moments of eerie goings-on. The central characters of Caro and Ollie and their daughter Jade are believable, but the others are rather two-dimensional stock characterisations and rather predictable in their behaviours. This tale is not as dark and unpleasant as Peter James’s stories of Dead Simple or Looking Good Dead (currently on a regional tour) and the adaptation fails to develop the mystery or horror potential and stays away from farce and comedy. It does add something different to the Mill’s anniversary season and I have no doubt that the regular visitors will enjoy another night out at this wonderful venue watching this production.