The combination of a new play by David Hare, under the direction of Nicholas Hytner with Ralph Fiennes in the lead promises an evening of theatrical magic. Those of us old enough to have seen Sir Anthony Hopkins triumphant return to the West End stage in David Hare’s Pravda in 1985 at the National Theater have seen it work before. Hytner seems to have transferred that magic that the National Theater used to create to his new home at the Bridge Theatre, so picturesquely set in the sight of Tower Bridge and David Hare has again created another monstrous dominant central character that demands loyalty to his single- minded vision at a cost of everything else that matters in life. The result is a fascinating portrait of the man who shaped the Expressway network and parks that give modern New York its distinctive look and feel while exposing his dated misogynistic views and the modern debate about mass transit, cycle lanes and walking versus the private cars we have all come to depend on. At its heart is another extraordinary cartoonal by Ralph Fiennes as Bob Moses.

Hare uses two pivotal moments in Moses’s career to explore the character and the response of the public and the ruling classes to his vision. In the first Act, he is forcing through his opening up of Long Island to the middle classes with the support of Governor Al Smith by building two expressways down either side and a beach resort at Long Island Beach. Here the opposition is the gentrified landowners of the upper classes who regard it as their personal playground. In the Second Act, we jump forward thirty years to the mid-fifties and a plan to build an Expressway through the Washington Square Park on the pretence that it removes a bottleneck which has the effect of unifying a coalition of opposing forces from those who have had their communities destroyed by the Expressways to those who believe that cars need to be discouraged in favor of more efficient green transport. This gives the piece a strong modern resonance as so many Cities introduce cycle lanes and congestion zones to discourage travel by car. If the Mayor of London was still in his old office in City Hall next to the Bridge Theatre, he would be whooping with delight at the defeat of the private car supporters in this play! 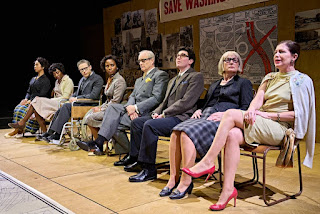 Ralph Fiennes, as always, is magnificent a towering stage presence. With a precise and clear delivery and conveying with every move the self-belief and arrogance that drove Moses to uphold his vision on a city as he bulldozed his ideas through authority in straight lines just like the roads he wanted. As they note “you can’t plan by committee”. He is wonderfully supported by two excellent nuanced performances from Siobhan Cullen as Finnuala Connell, his feisty loyal assistant, and Samuel Barnett as his lead planner, Ariel Porter, as we gradually see their loyalty tested over time by his steadfast insistence that he knew best. His interviews with Henry Vanderbilt (Guy Paul) and the electric encounter with Al Smith, the Governor of the City (played with delightful energy by Danny Webb in the style of the legendry American comic George Burns) are brilliant pieces of writing telling the story and creating the characters with comic ease. These scenes define the man and the show.

In the second half the mood changes with the emergence of new modern lines of resistance led by Jane Jacobs (Helen Schlesinger) and the voice of the youthful underclass, Mariah Heller played by Alisha Bailey who has joined his office. The message becomes the driving force of the speeches and although it is touching as we see the impact of his single-mindedness has had on those around him, the storytelling is less elegantly portrayed with more exposition and explanation. 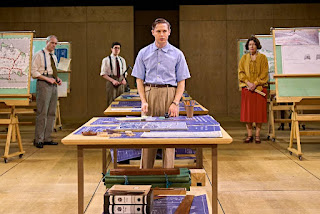 The whole production is simply staged on a large empty thrust stage which fills with the drawings and plan and models of the planner’s projects and occasionally becomes the tools for explaining his vision. We don’t see the unintended consequences the plans had on communities and downtown land prices, but we hear about them as Moses drives his Expressways relentlessly to where he wants them to go displacing 250,000 people.

Fiennes is, without doubt, one of Britain’s leading stage actors and it is a privilege to see him work his magic. Each piece he tackles he breathes amazing life into the words that hold you enraptured whether reading three and half hours of De Profundis in Reading Gaol or tackling the literary work of TS Eliot in Four Quartets he has a way of grabbing your attention and it. He does it again here and you are torn between admiring Moses’s vision and commitment and hating his apparent uncaring attitude to his workforce and alternative views.

If you can’t get a ticket to see him at the Bridge, the play will be broadcast to cinemas on 26th May by NT live and I urge you to see it then.