In late 2021 the Mill at Sonning in Berkshire staged a wonderful production of Top Hat and the Watermill in Newbury staged Brief Encounter with the music of Noel Coward to delight audiences returning to these welcoming and exciting venues after lockdown. While many venues seem to be struggling to put on shows these two venues start their 2022 seasons with an immersive experience at The Mill of Still Life, the original Coward play on which Brief Encounter was based and the Watermill opens a brand-new play of Spike , about Spike Milligan, at the end of the month. Berkshire audiences are very well served by these wonderful venues and their interesting programmes.

Still Life was written by Coward in 1936 as one of nine one act plays which were presented under the banner Tonight at 8.30. He scripted and produced the classic black and white film, Brief Encounter, directed by David Lean in 1945. Artistic Director Sally Hughes made the bold decision to stage the original play in her downstairs bar rather than her theater and to create a unique immersive experience. Director Tam Williams delivers on the concept using the intimate space cleverly to place the audience on tables in the railway cafe of Milford Station so that we feel we are eavesdropping on the conversations of the staff and visitors waiting for their trains to depart. 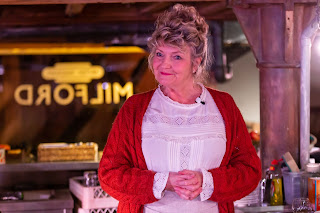 Any concerns about sightlines or hear spoken words in this unusual space soon disappear as the lights dim and we hear the steam trains puffing past the large glass window that bears the station name, and the characters take up their positions around the central modern bar dressed in thirties props for the show. We are all close enough to feel we are furtively listening in to the three blossoming romances that make up the story, their voices are well amplified, and the simple lighting is very effective. We can observe the characters close up and catch all the nuanced looks and glances as they react to each other. Occasionally we catch their eyes and feel we are part of the story too sharing an overheard moment.

Though the story is very much rooted in the thirties’ attitudes and culture, with a cup of tea 3d and a three-star brandy 10d and each scene opens with the charming music of the period, you still feel the underlying story has a timeless appeal . At the heart is a married Doctor, Alec (played with stiff upper lip by Alisdair Craig) and his chance meeting and subsequent blossoming love for Laura, a respectable married mother of three children, (played with a simmering guilty passion by Rachel Pickup). We watch their relationship develop over five scenes set between April 1938 and March 1939. Pickup captures that developing love for Alec beautifully with wistful gazes through the cafe window to the passing trains, worried pauses, and even her prim and proper hair show signs of her despairing guilt by the end.

In sharp contrast is the relationship between cafe manager, larger than life, Myrtle Bagot and her lustful admirer Albert Godby who is looking for some “slap and tickle” between checking tickets and gulping down tea. Played by Elizabeth Elvin and Antony Jardine, they add some delightful comic business and their eyes sparkle with anticipation. 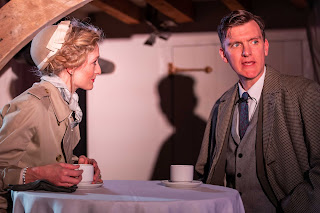 Equally good is Emily Panes as Beryl the waitress whose gentle flirtation with Stanley (also played by Jardine), the confectionary seller on the platform, is portrayed with the subtlest of looks and movements. Panes also reminds us of the period as the saucy soldier giving cheek to Myrtle and in the music, she plays to signal each scene change.

Two critical scenes in the story from the film are only alluded to in the play set in this single location when Laura and Alec’s planned meeting at a nearby flat is interrupted (here explained by a voiceover) and her rush onto the platform as the Express trains , but that does not detract passes from the depiction of their developing relationship and the torment caused by her desire to maintain her self-respect and standards of decency. The result is a beautifully acted short play and a uniquely immersive experience that warms the heart and to add to your pleasure you can purchase a Sandwich lunch and tea to really feel part of the action! It’s a short run but hopefully, Sally Hughes will be encouraged to try more immersive ventures in the future.