Spike Milligan was a comic genius who inspired a generation of new innovative comedy sketch shows with his manic zany brand of comedy. He found fame in the writing and starring in over 250 episodes of the Goon Show on BBC Radio between 1951 and 1960. I first encountered his style of humour when I read his hilarious 1971 autobiographical publication of Adolf Hitler: my part on his downfall and later in his unique series of TV sketches shows Q5 to Q9 between 1975 and 1980 but my lasting memory will be seeing him on stage in 1982 at the Lyric Theater in Shaftesbury Avenue.

This new affectionate play by Ian Hislop and Nick Newman seeks to explore what made Spike the man he was through his war time experiences, his relationship with his co-stars and his first wife June and the constant battle with the BBC Hierarchy at a loss to understand the appeal his writing had with the listeners. Those who remember him and his humour will enjoy this fast-paced exploration of the period when he was writing the first 150 episodes of the Goon show which tries to capture the essence of all three of the main stars without it seems attempting full impressions of them . It is produced in the style of his shows, full of energy, amusing sound effects and sudden changes of location. 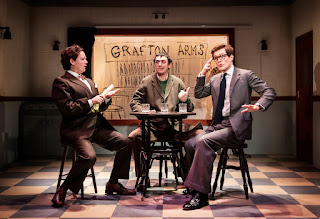 Spike is played by John Dagleish and he captures some of the distinctive mannerisms and occasionally the famous voices he created. We begin to understand how the PTSD from World War II, the pressure of writing scripts to deadlines and insecurity fuelled by being undervalued by the BBC caused his bots of manic depression although only rarely do we see the gleeful delight he displayed in later TV shows revelling in his eccentricity. George Kemp plays the brilliant young comic actor Peter Sellers who attracted female admirers but was equally insecure. Jeremy Lloyd completes the trio as the ebullient Welsh singer Harry Secombe with a man with a distinctive laugh and voice. However, the biggest laughs are delivered by Margaret Cabourn-Smith as Janet the BBC Foley artist who wonderfully explains and demonstrates the techniques and innovations that Milligan’s scripts and complaints helped to develop in the radio shows.

The BBC hierarchy is represented by Robert Mountford as a stuffy executive speaking in received pronunciation and James Mack as the producers Dennis Main-Wilson and later Peter Eton. Ellie Morris plays Spike’s first wife June and the BBC executive’s wife. The best scene of the play is when they recreate the January 1955 Goon show episode, 1985, which was a brilliant parody of George Orwell’s 1984 (which was broadcast by BBC radio the year before) in which the Big Brother Corporation is mocked, and Room 101 is somewhere in Broadcasting House. Stephen Fry adds his distinctive voice to the show as a BBC announcer. 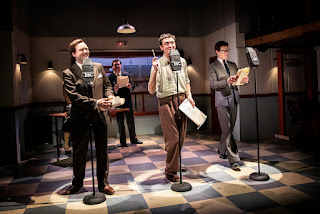 The whole production is set in witty and cleverly designed set by Katie Lias which turns the BBC radio recording studio into the other locations with a swish of a curtain and some simply drawn backcloths in the style of Spike’s own cartoons and uses hidden doors and gauzes to add to the illusions of madness or the memories of war disturbing him. The swift movement of props and foley sound equipment by the cast adds to the impression of the frantic disturbed behavior that was a feature of his whole life. Paul Hart and movement director Anjali Mehra organise the flow to create the distinctive flavor of the original shows and create a breathless insight into the Spike the writer.

For anyone old enough to remember the Goons this is a glorious nostalgic reminder of their humour and its appeal and an insight into the mind of the man behind it. I am not sure it will bring new fans to his brand of comedy and certainly does not extraordinary erase the memory of seeing this man sitting on the front of the Lyric stage in his show chatting to the audience back in 1982. of a Film or BBC drama in which these uniquely talented complimentary comedians could be fully brought back to life for a new audience so they would begin to see how he influenced a generation of great comic writers. However once again this intimate theater space in Newbury shows what can be achieved with creativity and innovation just like the Great Spike Milligan did all those years ago.