When the original scriptwriter of the seventies hit sitcom, Some Mothers do ‘ave ’em, Raymond Allen, was approached by Guy Unsworth and Joe Pasquale about a stage revival of the characters, he gave them the complete scripts and they developed this new play based on one particular episode. But they could not have envisaged that the UK tour would be cut short in March 2020 by the pandemic. After a two-year hiatus it is back on tour opening at the Gordon Craig Theater in Stevenage before traveling around the country until August, and if you are looking for a silly farcical night out it is well worth booking for one of its venues.

Don’t go expecting to see an impression of Michael Crawford’s iconic creation of Frank Spencer, the hapless-prone but loveable accident at the heart of the story. Instead, Joe Pasquale brings his own unique physical presence and comedy to the part. He is a comic with a love of silly gags delivered with his distinctive squeaky voice and his comic timing lends itself to the situation and gets ever more manic as the farce develops. We do get the iconic beret and white trench coat from the original, but the adaptation avoids the “Oh Betty” catchphrase and Crawford’s mannerisms. For those who remember the twenty-three episodes of the Sitcom(1973-1978) it takes a moment to adjust to Pasquale’s version but after a short while you just sit back and enjoy the madness of the rising chaotic business. 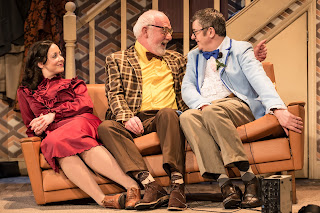 Pasquale drives the whole show. His Frank is a DIY disaster putting in a serving hatch, making the front door and fixing the lights, each telegraphing a gag to follow. He is at his best in comical business with an ironing board, the stair bannister and reorganising the furniture. The script gives him two running gags to keep us amused. Guy Unsworth has littered the lines with daft and innuendo ridden malapropisms and wordplay, so many that sometimes there is a delay before the audience gets it. He is a “dick of all trades” and tells us he was “born immature”. In the first act, the running gag is the misunderstanding between characters over two big family announcements, that Frank has got a TV interview and that Betty is pregnant. As she tells him,” You know I said I was going to the dentist, well really, I found out I’m pregnant” to which Frank replies “He can tell that by looking at your teeth.” In the second half, the show becomes a cross between a Brian Rix farce and The play that went wrong, borrowing the best business from both for laughs as Frank is interviewed by the BBC.

The set design by Simon Higlett reflects the lurid colors and patterns of seventies design with many practical features and collapsing furniture and a brilliant gag of a record player that turns itself off with a stamp of the foot. Each provides the opportunity for a comic interaction with Pasquale. 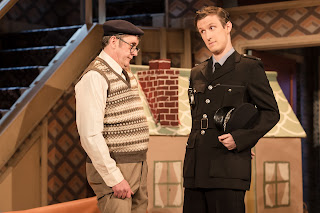 He is well supported by a cast of five with Sarah Earnshaw recreating Betty (with a touch of Michele Dotrice’s voice intonation) and Susie Blake having a ball as Betty’s lovelorn mother who drinks too much of Frank’s Mum’s homemade wine! James Paterson plays the bemused but sympathetic Father O’Hara, while Moray Treadwell doubles up as Mr Worthington (the bank manager) and Mr Luscombe (the BBC Producer) and Ben Watson as Desmond (the BBC cameraman) and the policemen (investigating a theft at the Council offices). Each has its moment of madcap humour.

They come together at the end for a strong reminder that this remains set in the seventies with a final bow dance routine to Mud’s 1974 hit “Tiger Feet”, and somehow it feels appropriate!

It is completely bonkers but perfectly suits Joe Pasquale’s comical stage presence with an air of total bewilderment and completely unaware of the chaos he causes. Guy Unsworth has done an excellent job adapting and directing this for the stage remaining true to the original but giving it a fresh life that should appeal to the nostalgic older audiences (the opening theme tune will be enough to get them recalling the good old days of three-channel TV!) and younger ones who simply want gentle gag packed silliness. Comedy Gold.