With the current trend of reviving golden-age musicals, we are being blessed with classic and wholesome shows gracing stages across the UK; and Singin’ in the Rain is no exception. This timeless musical movie to theater musical ticks all the boxes and encapsulates all the elements of ageless, crowd-pleasing theater that thrills every time. This production is a feast of gorgeous storytelling and impressive musical numbers.

Based on the 1952 Gene Kelly film of the same title, Singin’ in the Rain tells the story of famous silent movie stars Don Lockwood and Lina Lamont, on-screen lovers who in reality couldn’t be further from romance, despite Lamont’s deluded, starry-eyed fantasies. As Hollywood progresses with technology, the new and innovative ‘talking picture’ takes off, using devices which sync music and dialogue with the motion picture. This causes a slight problem for Monumental Studios as their leading lady Lamont cannot act, sing and has the voice of a whiny strangled cat. To the rescue come Kathy Selden, the bright-eyed leading lady with beautiful vocals and personality to match, as she dubs her voice over Lamont’s. The plot is light-hearted and simple but kept the audience engaged throughout, the spectators rooting for the romantic leads Don and Kathy, played by Sam Lips and Charlotte Gooch. With old-time classics by Nacio Herb Brown and Arthur Freed, the audience is delighted with numbers such as the title song Singin’ in the Rain, Good Morning and Would You. These songs were executed to perfection by the romantic leads with Sam Lips performing the iconic title song and You Stepped Out of a Dream with such ease and old Hollywood pizazz. Charlotte Gooch delivered beautiful, rich vocals and carried herself with grace.

Now there tends to be a consistency with touring shows in which the set is reduced or a production lacks the wow factor, which is understandable considering the set is continuously erected and taken down every week and transported to the next venue. However, Singin’ in the Rain does not spare any production value. This is a true West End standard show touring the UK. The set and company fills the stage, which in the case of the New Wimbledon Theater is pretty large. The ensemble numbers are electrifying and utterly stunning, especially the Broadway ballet which brought the stage to life with its jaw-dropping and hypnotizing choreography. No production of this show would do it justice without perfecting the catchy favorite Good Morning. The trio, completed with Ross McLaren playing Cosmo Brown, performed this number with all the class and refinement that would have made Gene Kelly himself proud. Every inch of this production oozes elegance and nostalgia. 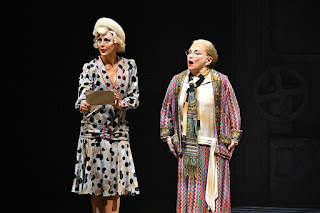 Honorable mention has to be saved for McLaren and Jenny Gayner who plays the sort of antagonist Lina Lamont. McLaren’s larger-than-life, camp and classic comic persona wins over the audience within minutes. His big number Make ‘Em Laugh was a real highlight, the energy, pace and commitment leaving the audience with their jaws dropped. We all love a cheeky chappy of course, but the true comedy genius of this show was Gayner. Her heightened portrayal of the conniving and devious airhead was fabulous. Receiving laughs in abundance, the scenes where she is filming the talking picture are an absolute riot and welcomed the biggest laughs of the night.

All that is left to say is that this show is a summer favourite, a happy-go-lucky celebration of old-time nostalgia and musical talent. Keep a look out at your nearest touring venue because this show is not one to be missed.