It is a real pleasure to go to the theater when you can hum the tunes on the way in as well as on the way home, although it does set the expectations levels higher as you hope for a highly entertaining and amusing night. For once this regional tour of Singin’ in the Rain delivers and exceeded those expectations to the delight of the full house at Woking’s New Victoria Theatre.

It helps that it is a remounting of the 2011/12 Chichester Production that had a spell at the Palace Theater in the West End and returned to the Sadlers Wells Theater in 2021 and for once those billboard promotions of direct from the West End ring true. This is a show that brings the production values ​​of the West End to an extensive 20 regional tour venue until August this year. Brilliantly staged with a large rain trough by Water Sculptures for the iconic Singing in the Rain routine, beautifully lit for the ballets, stunning choreography throughout and all performed with great chemistry and comedic delivery by the principals. It fully deserves that standing ovation it gets on its press night in Woking. 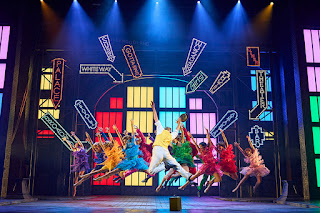 Adam Cooper led the cast at Woking as Don Lockwood, the Gene Kelly role in the famous 1952 MGM film version, reprising the role he played ten years ago. He may be a little grayer, but he still moves with ease and grace and revels in the kicking of water over the first rows of the stalls in the climatic end of Act 1. He smoothly portrays the heartthrob silent movie star of 1927 who falls for the beautifully elegant failing actress Kathy Seldon played by Charlotte Gooch. She too has a great stage presence gradually falling for his charm and singing and dancing with equal grace. They are perfectly complemented by Alastair Crosswell as Cosmo Brown, the former Vaudeville partner of Don and now his musical accompanist at the studios. He brilliantly brings to the stage the comical energetic personality of the character. His dance routine of “Make ’em laugh” is wonderfully choreographed and includes lots of clever and amusing stage business. Together the three are brilliant in the upbeat and fun “Good Morning” as they dance around the street.

A real and delightful surprise is the performance of Faye Tozer, best known as a member of Steps, but here in a largely non-singing role as the silent screen beauty Lina Lamont with the squeaky voice that was definitely not made for the Talkies. She has great fun in the role from her preening movie star posing, her love of Don to her angry reaction to being overdubbed, she plays it seriously for laughs. There is good support too from her confidant Zelda, played by Imogen Brooke. 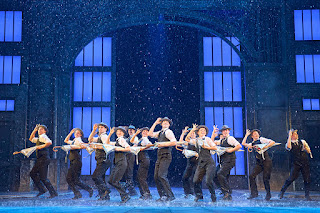 The whole show is designed to deliver the ‘Singin’ in the rain’ routines which close Act 1 and Act 2 with a large water trough to catch the heavy downpour from the multiple sprinklers above. These routines are extraordinary in their ambition for a touring show and the choreography by Andrew Wright does just enough to remind us of the film sequence while giving the routines their own fresh feel as Don and the Cast splash their way through the dances. It takes the stage management the whole of the 25-minute interval to dry the place and reset for the Second Act and I am sure a real headache for Wardrobe in drying out the finale costumes!

Musical of the forties & fifties seemed to have a habit of fitting ballet sequences into Act 2. Oklahoma had its dream sequence. Carousel has its Louise Ballet. King and I has it’s the Small house of Uncle Thomas. This show has two Ballet sequences that seem shoehorned in when the Studio asks for a tap-dancing sequence. They do create an opportunity for the choreography to let fly and have some fun and in the world of TV Strictly Come Dancing fans are appreciated and interesting. Here we have a very colorful full cast sequence in primary colors and then a sexy sultry dance number by Harriet Samuel-Gray. They are excellent dance routines but don’t really develop the story. 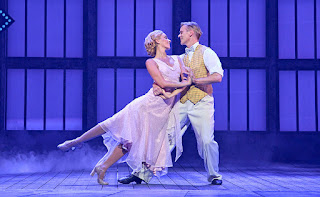 This is a wonderful romantic comedy. Great songs. Delightful comic touches. Varied and precise choreography. And a celebration of musical theater in the finale with the whole cast joyously Singing in the Rain which sends the audience home smiling and humming the tunes. It’s a long tour but well worth catching as it tours the country and hopefully, the cast swops will keep it fresh throughout.