The Barn Cirencester’s promotional brochure promises for Rogers & Hammerstein’s Some Enchanted Evening an “enthralling review of some of their most stunning compositions with a glorious parade of genuine hits” and Director Paul Milton explains that the show is “carefully constructed” presenting some of the songs with “a twist or unexpected interpretation”. For this to be true the audience needs to be familiar with the song and its original context. Although nearly everybody in the audience will be familiar with the five big fifties musical hits, Oklahoma! Carousel, South Pacific, King and I and The Sound of Music from either stage shows, or the film versions they are unlikely to recognise songs from State Fair, Allegro, Flower Drum Song, or Cinderella. It is only in the final medley that the show finally takes off into a celebration of their hit songs with “My favorite things”, “Lonely goatherd”, “Oklahoma”, “June is busting out all over” and “Happy talk” before the title song “Some Enchanted Evening”, all genuine hits which at least sending you home humming the tunes and smiling.

Before that the careful construction is a rather bizarre concept by Jeffery Moss, creating more of a sense of a rehearsal room or audition with sound checks in the opening twenty minutes with house lights on. Without any narration or song list to guide us you spend the first few moments trying to recall the song and the show it was from and before you know it, they have switched to another song in not so much a medley as a mash-up. Each of the performers is given a stage name connected with the Composers but for no discernible reason, Nellie (a character in South Pacific) sings “I Have Dreamed” from the King and I but Will (from Oklahoma) sings “Younger Than Springtime” from South Pacific. 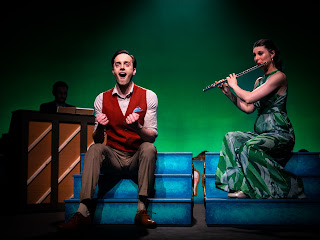 However, the five actor/musicians do have fine voices and put over the music well. Aoibhean Biddle is Nellie, Heather Condor is Julie and Emma Jane Morton is Anna with Laurie Denman as Will and Ben Pulman as Billy and there are plenty of enjoyable moments. Billy’s “The Surrey With The Fringe On Top”, Anna’s “I Cain’t Say No”, Nellie’s “A Cockeyed Optimist”, Julie’s “Out Of My Dreams” and Will’s “There Is Nothing Like A Dame” provide each with an opportunity to shine. Then together Julie and Anna sing “Sixteen Going On Seventeen” to Nellie and the three girls together sing “I’m Gonna Wash That Man Outa My Hair” with Billy and Will together delivering “A Puzzlement”. The whole company are together in “ Shall We Dance?”. All these are songs that we know and love.

The setting does not help with an upright rehearsal piano in front of what looked like a half-built carousel and two large treads offering the only variation in staging, so it is down to the lighting designer to help paint pictures and create the atmosphere around each song which is done very well with pretty color washes and well picked out spots illuminating faces. However, their voices were strong and clear with accompaniment on the piano supplemented from time to time by the flute, clarinets, trombone, saxophone, and percussion all played by the cast. 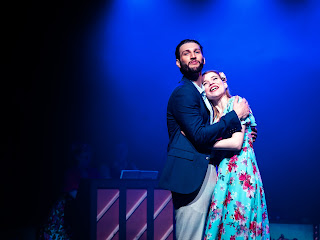 This talented group of performers worked very hard to put the strange concept across. I longed for a narrator as in “Side by side by Sondheim” to add some context or wit or a few words spoken by the cast between the songs to flesh out their characters but instead, you are asked to sit back and let the wonderful fifties melodies of the songs about romance, love and relationships wash over you and wallow in the nostalgia of simpler times.

And when you recognise the song and they sing most of it, you can do just that so that after the “Puzzlement” some of its offers “An Enchanted evening”.