Post Pandemic audiences have returned to theater seeking uplift and distraction from the global woes, so it is a bold move by Empire Street Productions to stage a new straight play in the West End with a powerful heartfelt message for something to change in the legal system dealing with sexual assault cases. The statistics show over 170,000 recorded sexual assaults in the year to September 2021 (an increase of 12% over the preceding year) and 37% of these were rapes. The program highlights the long tortuous delay between filing an accusation and the case being heard in court. It also challenges the audience as they take their seats looking into the neatly ordered chambers of a sexual assault defense barrister to consider their own unconscious bias about sexual offenses, the victims and the perpetrators and the meaning of consent. How would we act if selected for jury duty on such a case? This reflection that the program prompts summarises not just the context but the narrative of the play. So, it requires a tour de force performance and some smart and slick direction to bring the arguments, so clearly set out in HHJ Angela Rafferty’s article, to life on the stage. Jodie Cromer duly delivers in a remarkable gripping one hundred-minute one-woman performance which marks her West End Debut.

This is a legal game of two half. In the first section, she explores how she became a defense barrister in sexual assault cases, prides herself on never “coming second” (losing a case) and revels in the role of challenging and exposing the inconsistencies and gaps in the prosecution case. It’s a brilliant engaging performance, energetically prowling around the stage, setting the scenes, and grabbing the audience’s attention with glaring eyes and pointing fingers. She is at the top of her game; funny, witty, sexy, provocative and in control. There are tiny insights into her Liverpudlian background and some self-doubt which she has to overcome to succeed, culminating in a quick sexual encounter with Julian on the sofa of his chambers establishing that rape does not have to be between strangers in a first encounter.

In the second half, the tables are turned as the difficulties and horrors of being a victim of sexual assault are brutally and painstakingly exposed as she suffers a drunken rape in her own flat and the indignities and prolonged suffering of the consequences of the case. It is a fascinating and dramatic moment when she elicits her last laugh from the audience as she retches into a toilet before a deathly silence stillness fills the auditorium as she begins to immediately describe the physical assault that followed. There is less variation in the monologue thereafter as she lays out the feelings, confusion, and frustration of the legal process but the power of the message forces your attention. Suzie Miller’s script feels insightful and informed but despite the clarity of the words the final provocative and emotive rhetoric hammer home the message without the eloquence and subtlety of the early writing in a straightforward plea for change. 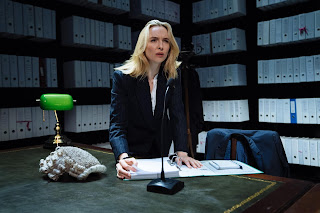 There are clever touches in the production (directed by Justin Martin) to support Cromer’s stupendous efforts. She changes costumes to reflect her status and state of mind. The rain effect signals the transition from a strong defense barrister to an exposed, vulnerable and frightened victim. The barrister’s case files of Miriam Buether’s scene-setting staging are flown away to reveal a dark empty space filled with close up video of her evidence and a clock counting the days until the case comes to court. When the case files return, they are artfully picked out by spotlights reflecting those of the 170,000 cases that made it to court in the process we have seen. The underscore by Ben and Max Ringham adds drama to the changing scenes.

This is a sold-out production which runs to 18th June and is sure to accumulate awards in the next round for Jodie Cromer and the production. It establishes her as a brilliant stage actress who we must hope to see more often on a West End stage. It exposes the challenges and problems with the legal system of dealing with the deeply troubling and emotive cases where it is one word against another and its powerful closing plea for change must surely be heard. When the theater engages the mind and emotions like this it truly is doing its job.