It’s 1921 and we are in Camden where ‘The Jew’ Alfie Solomons runs things. However, there is a storm brewing with new friends and enemies making themselves known. In a bold move, Alfie has agreed to make a deal with Birmingham’s entrepreneurial gangsters The Peaky Blinders (for a hefty profit of course) so the fun can really begin! Lead by Tommy Shelby, the Peaky Blinders are now on the rise in London Town and unless the Italians succeed in getting in their way, they plan to take it all. This is worth having a party for!

Peaky Blinders: The Rise is a collaboration between Immersive Everywhere, Peaky Blinders creator Steven Knight and Caryn Mandabach Productions. It is directed by Tom Maller (Doctor Who: Time Fracture/ co-creator of the ‘The Great Gatsby’ immersive UK show) with a script by Katie Lyons. This is a unique, immersive theatrical experience paying homage to the massively popular TV series by physically taking its audience on an unforgettable ride into the deep dark wheelings and dealings of an underworld so seductive you just might change your career path at the end of the night . It features an array of some of the most recognisable characters from the show including, of course, Tommy Shelby (Craig Hamilton), his siblings Ada (Lucinda Turner), Arthur (Kieran Mortell) and John (Isaac Beechey), the matriarch of the family Polly Gray (Emma Stansfield), loyal secretary Lizzy Stark (Megan Shandley), Camden kingpin Alfie Solomons (Sam Blythe), the Italian Charles Sabini (Angus Brown) and many more. Taking place in a perfectly placed location, The Garrison in Camden Market, this experience entwines storylines and character plots recognisable from early seasons of the TV series into a night of drama, violence, gameplay and partying. The idea is that you, the audience, play a part in shaping the future of the Peaky Blinders in their quest for power and money. As a result, countless side missions are performed, espionage engaged with and allegiances formed all in the name of loyalty towards the gang. But if anyone asks, you are a ‘baker’.

The Garrison has immaculately been dressed to embody the peaky blinders world and constantly expands and contracts into epic spaces or claustrophobic rooms to disorientate. One minute there is a dance floor and the next a boxing ring. You might find yourself with the Italians in the Eden Club or putting 2 bob down on the football in the bookie’s office.

The sound design by Luke Swaffield and associate Niamh Gaffneyis for Autograph is spot on, featuring a blend of time-appropriate vibes and modern classics from the likes of the Arctic Monkeys and Nick Cave, which get the heart pumping and the feet moving. The costume design by Rebecca Brower is a fantasy and on the whole, the production behind this event plays a crucial role in constantly propelling the viewer experience forward just like it does on TV. 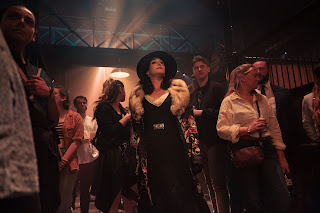 The characters who inhabit this world are wonderfully cast and take on the much-loved attributes of the iconic original cast. From Arthur’s dramatic fully embodied cries of victory to the sheer intimidating presence of the gangsters and the general embodiment of each character are maintained throughout the performance and no doubt owe a great deal to movement director Charlie Burt and vocal coach Sarah McGuinness. In particular, the performance of Sam Blythe as Alfi Solomons is pitch perfect and Craig Hamilton as Tommy Shelby is exactly who you want him to be, cheekbones and all.

In terms of the gameplay, it will of course be unique to each audience member. My involvement included forming an allegiance with Ada to help her bargain work terms with her brother Tommy and being tasked to gather information on the Italians at their secret cocktail bar. The latter involved being separated from the entire production on a journey through Camden Market, accompanied by one of the intimidating gangsters to get to the Eden Club. Sometime later, once I rejoined the main party, I was re-approached for the information I was meant to have obtained. I genuinely felt stressed (in a good way) to deliver the goods, and, you know what, I would have liked to have gone further given the chance, to get even deeper into the mission. Unfortunately, despite being given new instructions to do just that, time proved to be my main enemy and the plot had to continue without my input. This is where my main criticism lies. In regards to the tasks and private missions, some do feel like they are literally just given as something to do and don’t hold much weight. In one sense that is fine, and enables the audience to engage with the immersive side of the performance but I couldn’t help but feel that the game side of things was a bit safe lead to a few too many dead ends rendering them slightly redundant . But this point could very well just be me getting carried away with the fun. Ultimately it is the audience engagement that makes immersive theater so addictive and that is up to you to commit to. It’s possible to take part as a bystander but if you take the risk and say yes to anything that comes your way, your night will be all the best for it. 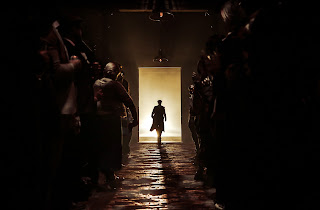 I myself am a big fan of the show but I also took someone with me who had never watched an episode of Peaky Blinders. There were obviously details of the experience lost on her (through no fault of the production), however, she was still able to engage and appreciate the spectacle of it all nonetheless. If you come with the spirit to have some fun, not being familiar with the TV series won’t be a barrier to your good time.

At the end of the night, despite some inconsistency with the gameplay, Peaky Blinders: The Rise will give you a night to remember and a damn fine party if you let it. For fans of the show, this is as close as you will ever get to it. Chose whose side you are on and let the underworld take you over. But if anyone asks, remember, you are a baker!