It has been a very long time since I have read a Graeme Greene novel having studied the Power and the Glory at school but the title Our Man from Havana nevertheless has a strong resonance because of the Alec Guinness film of 1959 and its theme of spy relationships set in Cuba just ahead of the seismic change in the country with the emergence of Fidel Castro and the breakdown of the relationship with America which gave the book a prophetic feel. It was somewhat bold to adapt the book into a new musical and the progress of the development as always was anything but straightforward. With a director for the first workshop, a director for the casting in 2019/20 and a third, Abigail Pickard Price for the actual production the vision for the staging must have evolved over the course of its final development.

The final show which opened at the Watermill Newbury on the 11th of April is a curious mix described as a rollercoaster comedy in its promotion. It has the feel of a cross between the 1967 David Niven version of James Bond, with Rowan Atkinson’s Johnny English character and Peter Seller’s Inspector Clouseau with some Noel Coward style patter songs and Cuban rhythms and percussion. The comedy of those spy/detective creations is never quite matched in this production. The Program also describes Havana as the “mistress of pleasure” but we never really get a sense of the casinos, gambling houses and horse racing that attracted the rich and famous but are rather left in seedy bars, clubs and homes. 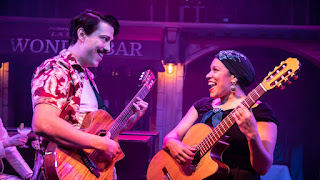 Designer Kat Heath creates the feel of these places with some well-designed walls covered in bright paints, peeling news cutting and graffiti and some ingeniously designed adaptations to two upright pianos which serve as the bars, bureaus, stages, and urinals of these locations. However, the pianos become dominant features and some of the choreographed movement to change location is rather labored and distracting. Indeed, as always Actors Musicians while admired for their virtuosity always seem inhibited in their performance as they play while moving around the stage. The Watermill’s obsession with this format is now overdone. The Lighting design by Robbie Butler with its bright primary colors flooding the stage reflecting the attractive graphical design of the program does give a sense of the warm lively Cuban light. The sound mix at times meant that the onstage MD Antonio Sanchez’s piano playing drowned out some of the vocals.

Against this background, the cast of five works very hard to retell the Graham Greene spoof spy story. Nigel Lister makes a very likely slightly bemused spy, James Wormold, making up tales of what he has seen on the island for the British Government. Alvaro Flores has fun in the contrasting roles of stiff upper lipped Hawthorne and dodgy local copper Segura as does Adam Keast as the German Doctor Hasselbacher and the British Spy Chief. Daniella Agredo Piper has the most convincing character as the seventeen-year-old Millie obsessed with her horse, while Paula James enjoys the femme fatale roles of Beatrice and Maria. Sanchez’s piano player becomes a sixth character in the story. 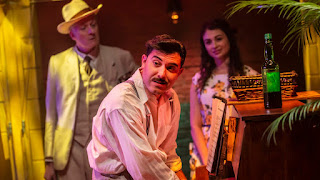 Ben Morales and Richard Hough whose lockdown stream of the Sorcerer’s Apprentice was so successful because it focused on the storytelling with a musical underscore rather than placing the music playing at the center of the story have created some interesting musical arrangements. The Streets of Havana acts as an underlying theme but it is the opening of Act 2 with “We don’t know how lucky we are” that really strikes the right chord with a good beat and comic touches. Most of the rest has the feel of the period and the setting without being memorable.

The Watermill sets high standards and last month’s The Wicker Husband was extraordinary. This is a more tipid offering where you can imagine what might have been in adapting the book, but the music and lyrics are not compelling enough, and the production style overwhelms the storytelling so that the comedy against a thrilling hot sexy background of Havana in the late fifties never quite takes off.