A family reunion can either be a wondrous occasion, or a total disaster. When Daniel’s (Bill Pullman) children Nedward (Stephen Wight) and Pam (Sinead Matthews) come to visit, to see how much they’re being left in the will and how much their father’s house is worth. It already has the recipe for a chaotic affair. Except for the other child Michael (David Harbor) whose already been living at his father’s home for the past eleven months to care for his dying father. It becomes apparent quickly that this is one family reunion that won’t be forgotten in Theresa Rebeck’s dark comedy.

For a start, what’s immediately impressive is the set, rural Pennsylvanian home with a great deal of attention to detail, Frankie Bradshaw’s set design immediately transports you to an old man’s home. With the homely but messy feel around the place, the set saves its biggest surprise till the second act for a surprising reveal. 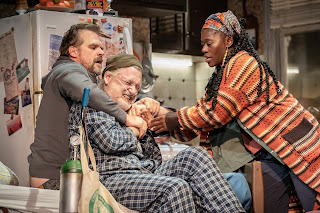 It’s all very comical from the off. The show opens with Michael handing his father freshly made soup, and immediately Daniel throws it across the floor in a refusal to eat it. Immediately we get the sense it’s a tumultuous relationship between the pair, with Michael recently returning home after a lengthy stint in the state hospital for mental health issues, Daniel persists in trying to vex him and get Michael to crack. Pullman and Harbor have fantastic chemistry on stage, they bounce off each other in every scene they’re together and make for a joy to watch.

Though Pullman and Harbor are advertised as the show’s marquee castings it’s Harbor who shines. He’s constantly on the edge, he’s resentful to his siblings for being left to look after their dad and we sense his permanent exhaustion, a nihilistic man defeated and waiting for his dad to die to escape the torture he’s been forced to endure for so long. Harbor is magnetic, not a moment passes when you’re not sat waiting with bated breath as you try to anticipate how he’s going to react to the various taunts from his siblings and how he’ll take just about anything that unfolds around him. From start to finish he’s captivating and engaging. Pullman, though not nearly in as much of the show is convincingly disgusting as careless David. He uses his old age as a means to disregard what he does and says, many a time mentioning he can make racist, transphobic and outright rude remarks. A particular reference to owning the hospice care worker Lillian (Akiya Henry) based on her skin color causes outrage in Michael. Pullman is comical though, a lot of the show laughs center through him and Pullman delivered them expertly. 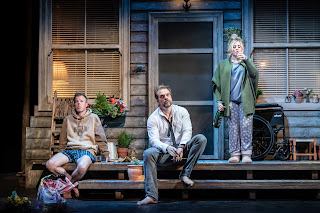 The introduction of Nedward and Pam comes at the perfect moment, adding a little extra to the story when the character enters. Nedwards’ entrance initially oozes arrogance, constantly on his phone and never actually there when talking to Michael, the two appear to have this awkward relationship, very similar to the relationship in ‘Of Mice And Men’ of George and Lennie. Though later they begin to embrace each other more. The second act brings in Pam, who is hellbent on getting what she’s entitled to and destroying Michael at all costs. She’s arrogant and antagonising from the start, escalating as the second act progresses. With a take no prisoner attitude, the gulf between the two becomes unbearable as she diminishes and ridiculed Michael at any opportunity.

The comedy comes from the incision of the situation, the first act warms up the audience for the explosive second act, everything implodes and the family fall apart in front of us. Hospice worker Lillian is a tremendous addition to balance out the family, particularly Michael as she senses the two siblings working together against him.

Whether it’s intentional or not it does very well in its relevance to today’s society. Pullman almost appears like a previous American president with his outburst of ‘Fake News’ and after the news in America regarding the abortion ruling, Michaels’s outburst of ‘The American Legal system is a mess’ couldn’t come at a more relevant time.

Director Moritz von Stuelpnagel has worked a wonder, a hilarious but vicious family reunion that’s humorous but heartfelt. The only real ‘mad’ thing here would be you if you were to miss this show.