Directed by SIX the musical co-director, Lucy Moss, this production of Legally Blonde, unfortunately, highlights her inexperience. Regent’s Park is a huge space and this product just doesn’t fill it, not only does the cast not seem big enough to fill the stage but there are choices made that just don’t work. This along with the absolute horrendous set design, the show just seems a bit messy and 2D.

The thing about Legally Blonde and why we all love it is because the characters are loveable and real within a bit of a ridiculous storyline, what Lucy Moss has done is taken out the realness and replaced it with 2D characters and slapstick comedy which strips back the truth within the story. 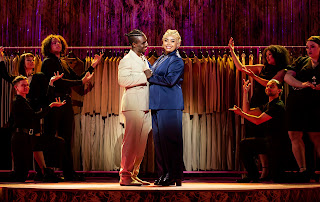 There are too many concepts in this show that take away from what we should be focusing on; the costumes (by Jean Chan) were all coloured coded with the Delta Nus in complete pink, Salon workers in all orange, Harvard Law students in dark greens and browns and the prison in mint green. This distracted from the performance, especially the all pink. With a pink stage and everyone on it also wearing pink you didn’t know where to look and it made the Delta Nu characters all mold into one because there was no distinct difference in the characters.

This show has been conceptualised and has been directed for laughs which means the truth of the story, the message and the real characters we can relate to all get thrown out the window. Luckily the saving grace for the show are the cast who, as a whole, manages to breathe life into an otherwise 2D direction.

Courtney Bowman is a name you need to remember, starring as Elle Woods in a momentum casting choice she carries the show as a true leading lady. With comedy chops for days and a voice that was made for this score, this is a performance we will remember for a very long time. Innocence and naivety are brought to Bowman’s role, which reminds us that she’s actually just a young girl trying to find her way in the world. This is a career-changing performance for Ms Bowman and I am so excited to see what she does next.

Nadine Higgin as Paulette, what a moment! An Olivier Award-worthy performance if you ask me. A naturally hilarious and well-rounded character in a world of 2D, she brings so much life to the piece. 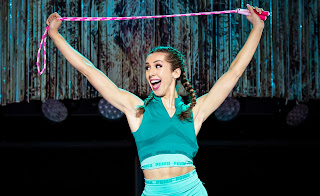 Two other stand out performances come from Lauren Drew as Brooke and Michael Ahomka-Lindsay as Emmett. Drew absolutely knocks it out of the park (literally) with her number Whipped into Shape and Ahomka-Lindsay captures an intelligence but also coolness as Emmett, making us get onto this side straight away.

Two standouts from the ensemble are Billy Nevers whose voice is just insane, he needs a lead role of his own, and Shakira Simpson who is actually a swing on the show, her roles had me in hysterics and to go on these early in the run is incredible!

This show is filled with quite a few big group numbers and one thing I wished for was to have more cast involved; Whipped into Shape for instance needed a fuller stage and whilst Drew impresses us and we can’t take our eyes off her, we do just want that extra sparkle of cast members to really add to the number. The choreography lacks slightly, with us just constantly wanting more from these numbers. Whilst I loved the modernization of the dance element I just wanted it to be more impressive.

I have to acknowledge the progression this show has made, in the theater world we are constantly preaching to be at the forefront of diversity and inclusion but we haven’t had enough results as of yet. But this production does that, and very easily. An example to all theater makers out there, take a note of this production as we’re on the right path and I feel incredibly proud of all those on stage making history.

On the whole, this is a brave reimagining of the show. Although there are a lot of faults with the creative aspect of the show, the cast manages to make us have an massive amount of fun.