There was a time when a visit to the National Theater guaranteed the very best in productions and performances and we rushed to book when the season’s program dropped through our letter box, now we wait for the reviews to tempt us to go online to book a visit to the ageing concrete venue that is looking the worst for wear around its edges. Shows like Warren Mitchell in Death of a Salesman (1979), Guys and Dolls (1982) and Anthony Hopkins in Pravda (1985) remain some of the greatest production I have ever seen. Another two memorable shows were the 1983 production of Sheridan’s The Rivals with Geraldine McEwan and Fiona Shaw and Richard Bean’s One Man Two Guvnors (2011) so we were tempted by the generally favorable reviews for Richard Bean’s reworking of the classic restoration comedy the Rivals into Jack Absolute Flies Again. The result was an amusingly pleasant Saturday night in a two-thirds full Olivier Theatre.

Bean’s reworking with Oliver Chris takes the basic love story from The Rival’s moves it from Bath to a Second World War Airfield (on the pretext of celebrating the Eightieth anniversary of the Battle of Britain, sadly missed due to Covid delays) and adds some of the comedy elements that worked so well in One man two Guvnors as the cast regularly break the fourth wall. However, in that hit, the cast created believable characters and the farce had a logic that made it funny. It was played for laughs with brilliant slapstick but was never over the top nor relied heavily on sexual innuendo. In this latest adaptation despite the best efforts of the cast the comedy feels more laboured, the jokes more often miss the mark and none of it seems remotely believable! 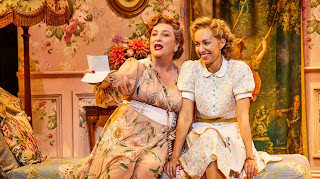 Caroline Quentin carries the show as Mrs Malaprop, the guardian of Lydia (Natalie Simpson) who frequently (perhaps too frequently) uses the wrong similar sounding words in her lines and delivers them with great aplomb and self-confidence until someone reacts on stage or in the audience and self-doubt creeps in. With captions to the side of the stage for this performance, you are regularly tempted to check the words to reinforce the jokes and she brilliantly incorporates this into the show when she steps forward to peer at the captions and check the mistake. It is a wonderful performance from this great comic actress. She is matched by Kerry Howard as the maid Lucy who also regularly comes to the apex of the stage to engage the audience with her lines and looks and who is the mischief maker in chief in this revised plot. Julia Melville (Helena Wilson) provides the other love interest rewritten from a relative of The Absolutes to a cousin of Roy.

The men fare less well in the changes becoming men enlisted in the services. Jack Absolute is moved from Captain in the army to a flying ace in the RAF and his father Sir Anthony from a wealthy baronet to a blustering army General who at least gets some good business with Malaprop. Bob Acres (James Corrigan) and Roy Faulkand (Jordan Metcalfe) Jack’s mates become pilots, the former an Australian and the latter a rather soppy Roy in love with Julia. Kevin Fletcher plays the Northern aircraft fitter Dudley Scunthorpe a creation to add to the confusion over mistaken identities which worked so brilliantly in one man two guvnors but is more heavy-handed here. 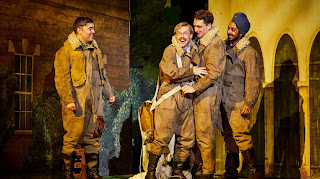 The show is wonderfully set on lush-looking grounds of Malaprop’s stately home requisitioned by the RAF as an airbase and although the distorted perspectives created minor irritations as walls become doors, the trucks move smoothly and effectively to create interiors scenes and the projected imagery and sound effects that fill the auditorium are wonderfully evocative of the dog fights over England in 1940 and there are good twists to the downing of aircraft offstage which give the story some emotional heart. Director Emily Burns keeps the pace frantic although the rather curious dance sequence seems out of place and did not feature the two Strictly Come dancing of Fletcher and Quentin as much as it might have done its inclusion in the show. You can’t help but smile and enjoy the performances, especially the fine cast of ladies at the center of the show, but you can’t help thinking if you are going to rewrite a piece of classic British Comedy it needs to elevate it to a new level not reduce it to reliance on seaside postcard humour.