The combination of Stephen Sondheim’s extraordinary score (less than a year after his death), Terry Gilliam’s outlandish creative ideas, Leah Hausman’s extensive operatic movement and choreography, a cast with the Julian Bleach recreating the weirdness of The Grinning man and Audrey Brisson captivating us as she did in Amelie, the evocative staging of a Pollock’s Toy Theater and the glorious setting of the intimate Theater Royal Bath combine in this production of Into the Woods in theatrical alchemy to create a wonderful celebration of this amazing composer. Sondheim’s music can be something of an acquired taste, but once acquired the joy never leaves you. Though the songs are not as memorable as those from Gypsy or Sweeney Todd, there is a wonderful tongue-in-cheek joy to the mash-up of traditional well-known fairy-tale stories and its commentary on the human condition with its themes of growing up, morality and wish fulfillment. This version does not seem so macabre as I recall it, although the majority of characters do die, the staging and childlike setting of the toy theater give it a more engaging emotional connection so that the final songs of “No One is Alone” and” Children Should Listen” are much more touching and meaningful.

Gilliam’s creative stamp is throughout the show with reminiscent moments of his Monty Python animations and his more outlandish movies. The dressed proscenium arch and forestage which mirrors Pollock’s toy theater center stage immediately set the tone as you enter the venue. The young girl playing with it, placing the tin cans and vases on stage brings you into her world of imagination before she invites you to watch the show. The delightfully comic Milky White (played with great physicality by Faith Prendergast) looks and acts like the girl’s toy. The Baked Bean tin becomes Rapunzel’s tower and the 2d sets look like they have been cut out of the Toy Theater kit. The use of the stage left box in the false proscenium for the Stepsisters (Charlotte Jaconelli and Jamie Birkett) is also very effective. When the Giant arrives, it is a cross between the Monty Python giant foot and the terrifying doll’s head from Toy Story. Visually it’s stunning in its theatricality and creativity. 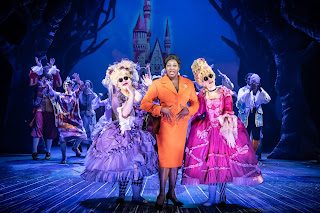 The bizarre plot sees the Baker (Rhasan Stone) and his wife (Alex Young) being sent into the woods to find a cow as white as milk, a cape as red as blood (from Red Riding Hood, Lauren Conroy), hair as yellow as corn (Rapunzel’s, Maria Conneely) and a slipper as pure as gold (Cinderella’s, Brisson) in three days in order to lift the curse of infertility which the Witch has set (Nicola Hughes). As in the traditional pantomime versions of these stories all get satisfactorily resolved but here it is done by the interval and the second half sees it all unravel as the consequences. The inevitable comparisons with the traditional Christmas shows are generally avoided and the production has the feel of a morality tale but with plenty of comic moments.

Julian Bleach’s eerie white-faced narrator dressed as a Victorian undertaker or the grim reaper moves stealthily around, peering around flats, hovering in the background until he is thrown to the Giant complaining “I just tell the story, I am not part of the plot ”! The two Princes are excellent with Henry Jenkinson as the flamboyant lothario Prince to Cinderella (“I am charming, not sincere”) and Nathanael Campbell as the more caring Rapunzel’s Prince (and doubling up as the voracious Wolf). Together they make the most of their song “Agony” and its reprise which for me was a show highlight. Cinderella’s Prince and The Baker’s wife have their “Moment in the Woods” to good effect. Another of the best moments comes in Sondheim’s challenging “Your Fault” as the survivors Jack (Barney Wilkinson), Cinderella, the Baker, Little Red Riding Hood and the Witch argue about who has caused the mayhem they have just witnessed. 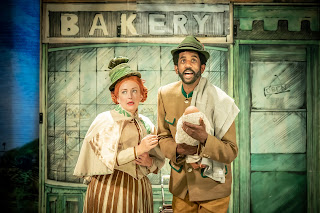 Somehow the characters seem to have more depth than I recall in earlier versions, so we connect with them and emotionally engage with their actions whether the youthful innocence of Jack, Little Red Riding Hood or Cinderella or the outrageous behavior of the two Princes and Baker’s wife . Rapunzel too, with her short hair giving her the look of Fantine in Les Miserable, presents a visible contrast between the girl in the tower and the crazed woman in the woods.

This is a wonderful reimagining of Sondheim’s distinctive discordant work brilliantly staged and very well acted and sung that sits perfectly on the Theater Royal Bath’s stage. It runs in Bath until 10th September. It deserves to be more widely seen and a West End transfer must be in the cards in 2023 but I hope to an appropriately sized venue, so it does not lose its intimacy. Some of Sondheim’s music especially this show, divides opinion but I urge you to go see it, even if you are not sure tribute about the tunes, for a visually theatrically superb reimaging that is a wonderful fitting to this great composer.