Ugly Bucket Theater are a Liverpool-based physical theater and clown company not afraid to delve into uncomfortable subject matters and make us laugh about it. As recipients of the New Diorama, Underbelly and Methuen Drama’s Untapped Award 2022, there is clearly energy behind this young company making their latest show, Good Grief, a contender for a place on your Edinburgh Fringe Festival dance card.

On brand for Ugly Bucket Theatre, Good Grief examines the grieving process that takes place before and after a good friend dies, through physical comedy, verbatim text and… techno dancing. It follows the life of a man who we meet pre-birth in the womb of his mother through to his afterlife after suffering from cancer of the intestine. Right from the beginning, he is subject to the hard truths of life. People and animals come and go and after a montage of macabre tragedies, he is paralysed by doom and eventually must also face his own mortality when sickness strikes. Both he and his loved ones are now subject to grieve a life disappearing. Sounds grim right? Well, not today. Obviously, the best way to address all of this is through clown! 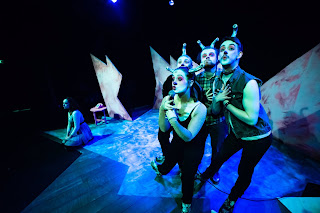 Death is one of the most relatable experiences all humankind shares and the clown is no exception. How they treat it, however, is with an honesty most of us will not allow ourselves and like everything, a clown approaches it is just another game to play. Ugly Bucket Theater tactfully take on that challenge. What happens when we die and what is important to experience before it happens? How much is death about the dying or living? Do we talk about it enough? Probably not. Between the laughs, all these dense questions are raised in Good Grief as it also highlights the absurdity of the grieving process, but without mocking it.

I went to the first preview of the show at Edinburgh Fringe and understandably that meant I saw the performers in a vulnerable position. The clown does not exist without an audience so how can you know what show you have before you get one? Despite a few pacing issues which made some of the sequences feel a little disjointed and an evident ‘feeling out’ of the material, there was little held back in terms of this performance. I can only predict that after their month-long run, the performance will evolve and find comfort in its black box home in the Underbelly venue.

In regards to their use of text, the main convention used interviews they had with people experiencing death, played over moments of action. This provides a powerful contrast to the show’s playfulness. The treatment, however, of their own voices is the only element that loses some punch. To talk or not is a choice and can be a valid one either way, however, when gibberish is used in place of words and becomes too descriptive by, also, incorporating constant gesturing, I am left asking, why not just use words? I also think this feeling had something to do with the fact that their treatment of the voice and text was not consistent enough in terms of gibberish, mime, or spoken words which ultimately dilutes their overall effectiveness. 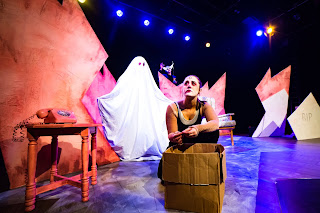 The most successful moments come when the company can express their sentiment in a purely visual or abstract way. For example, the depiction of the man in the womb before he is born and the anger felt when having to leave its comfort is simple and clear marking the treacherous beginnings of life. Also, when the healthy blood cells are represented by the performers in red caps before being taken over by zombie cancer cells with yellow caps is a hilarious and highly uncomfortable expression of something horrifying. Personally, I want to now see a show set exclusively inside the human body.

Accompanying the show is a graphic novel illustrated by artist Kidda Kinsey, that brings the show from the stage onto the page which can be purchased at the show as a lovely added touch to the work.

At the end of the day, this is a very wholesome production. Catch this troop all fringe at the Underbelly Cowgate and have a good old cathartic laugh and cry.