As the end of January approached the 2021/22 Pantomime season draws to a close and Producers across the UK reflect on the extraordinary challenges, they have faced in making sure the “show must go on”. Changing Government regulations, audiences’ reluctance to go to theater with a mask on and some worried about going if others don’t wear them, and of course Covid hitting cast and crew requiring understudies to step up to fill the gaps or rapid reblocking or rehearsing replacements. It will be a season that they don’t forget, and we hope the financial implications of canceled shows will not hit the regional theater in a terminal way.

Birmingham Hippodrome’s Goldilocks and the Three bears did not escape these challenges. Traditionally one of the last to open on 18th December and one of last to close, in its final week to its last performances on 30th January it looked like a full cast and ensemble. Jonny Mac had been brought in from Scotland to cover for Matt Slack early in the run and at many times of the Ensemble were off, so we were lucky to see the show as intended on free Newspaper promotional tickets. Indeed, it was unusual to see so many seats in this wonderful venue empty suggesting it too has seen tickets sales hit, with the Program cost cut from £5 to £2 to clear stocks another sign of lower sales than usual. 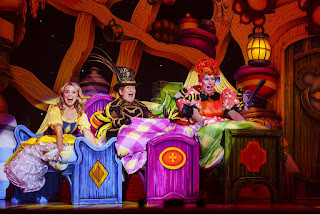 But as always, they deliver a spectacular, colorful and entertaining show even if it is not the “Greatest Panto on earth” as it is billed. Indeed, it is hardly a panto at all. Yes, it has a villain, a dame and a comic but the story is barely visible and there is no Principal Boy. It is a Circus show full of variety acts and Matt Slack comic turns very loosely linked by the search for a new star for the Circus while the villain seeks to get them closed down. That is not to say the variety acts aren’t good as they are but they are not as good as the genuinely spectacular acts in Circus 1903 which was staged at the Southbank in December. Indeed, if you saw the title at the London Palladium in 2019 you will recognise the format, the staging, the costumes, and the special effects all of which reflect the enormous investment made in the London shows which need to be recuped on a subsequent year regional outings. But there is no denying the audience there lap it up and enjoy the show.

Matt Slack is in charge, he injects the basic Alan McHugh script with his own material, some fresh and some identical to previous years at the venue. The impressions routine was very good aided by a very large screen just to make sure we recognised who he was doing which we did not really need. The Birmingham Lord’s Prayer was fresh and added to the local flavour. His Lip sync routine with Jason Donovan was better than many others this season and it is great to see the two working together. The trunk of truth and “if I were not” routines are executed with a precise comic timing to make the most of these old routines. 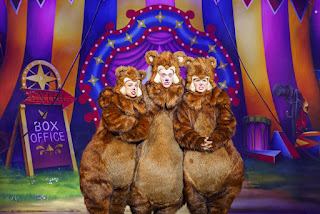 Andrew Ryan is one of the best of the modern Dame’s with a great physical presence in some amazing costumes, but he deserves more material than being just the feed to Slack’s comic and Jason Donavan surely needed a song segment like Donny Osmond delivered at the Palladium this year. Both these talented performers felt underused almost as if there had been some post-Christmas cuts to the running time.

Goldilocks (Samantha Dorrance) and the three bears (Ewan Goddard, Georgia Anderson and Jessica Daugirda) as title characters were relegated to walk on parts although Goldilocks acts as ringmaster introducing acts and Baby Bear does get a tap dancing routine. It might have been funnier if Mummy bear had been played by Doreen Tipton (cast as the lazy lion tamer) in the same way Nigel Havers played Daddy bear at the Palladium. She did at least get to ride the amazing Nellie the Elephant Twin FX effect although it too could have been integrated into the show better with a song. Alexia McIntosh, who has played Anna of Cleves in the musical hit Six also felt underused in the bit part of Candy Floss.

It was down to the Variety acts to add some magic to the circus and they are all good quality performers. Peter Pavlov and the Globe of Speed ​​is impressive the first time you see it. Pierre Marchand knows how to spin a diablo and milk the audience applause, saving the moment after each trick. The Gemini sisters are underused one replacing Matt Baker’s tight rope walk at the Palladium without any sense of jeopardy and then doing a swing act as an unnecessary distraction when Jason Donavan sings a song. Best of all is Phil Hitchcock as Mysterio with some effective magic illusions with a burning ball and then 4 doves, each executed with great flair and comic timing and leaving you wanting to see more of his illusions. 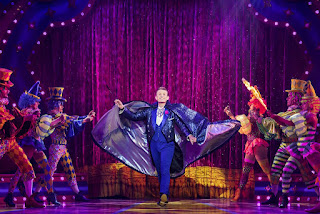 It is a very good entertaining show with a talented cast, spectacular effects, and brilliant lighting but it is not a Pantomime. The program announces that next year starting on 17th December 2022, Matt Slack is back in Dick Whittington a production that was outstanding at the Palladium in 2017 and with his comic input and another talented cast, I am sure this will be a Pantomime to remember and match their achievement with the wonderful version of Peter Pan in 2018. As the season closes, we are already looking forward to next year’s Pantomimes which will hopefully be Covid free and the creatives behind these shows will be bold enough to create some fresh slapstick and comedy routines to inject into strong story telling shows to make us all feel we will have to “do it all again next year”.