The adaptation of the films of the twentieth century for the stage and creation of jukebox musicals around artists’ catalogs has become a regular feature of West End and Regional Theatres. They benefit from a familiarity with the title and the music but have to live up to our memories of the original versions and often fall short of the expectations. It was, therefore, a delight to find at the New Victoria Theater in Woking that the adaptation of the 1984 film Footloose on its UK tour is much more than a celebration of eighties American culture and is a story with heart and emotional engagement with a strong feelgood vibe, some cracking good songs, and some lovely comic touches.

It is a simple story of three relationships and the impact on their lives of the death of four young people in Bomont five years earlier. Reverend Moore and his wife Vi are grieving over the death of their son Bobby and have banned dancing in the town. Their rebellious daughter, Ariel, is grieving too the loss of her brother and falls for the newcomer to the town Ren who carries the burden of being abandoned by his own father. Willard is one of the few local men to befriend him but struggles in his relationships too despite his affection for one of the local girls, Rusty. As the story plays out, we find ourselves caring about these individuals and their relationships. 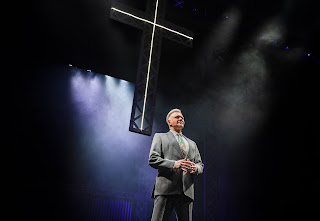 Darren Day is magnificent as the Reverend with a strong stage presence, a fine voice, and a beautifully judged melting of his resistance in the final scenes. He commands center stage with ease and sings with a delightful clarity as in “Heaven help me”. Opposite him is Holly Ashton as his long-suffering and loyal wife Vi who delivers a lovely “Learning to be silent” with her daughter Ariel and Ren’s Mum (Wendy Paver). Ariel is played with lots of energy covering her sadness by Lucy Munden. She captures the inner conflict between the fun-loving girl who is the center of attention and the cry for help as she screams at passing trains very well. Ren is played by Joshua Hawkins with matching energy and plenty of bounce but is at his best in the quieter scenes with the Reverend and Ariel as he gets behind the façade of both.

On its opening night at Woking Jake Quickenden was off with a back injury and so Ben Mabberley seamlessly stepped up as Willard, the awkward local lad who can’t dance and takes center stage in one of the show’s best-known numbers “Holding out to be a hero” in gold shorts and then proves he can dance in “Let’s hear it for the boy.” His love interest is played by a relative newcomer Oonagh Cox as Rusty who is excellent and one to watch going forward. She seems natural when she takes center stage with a powerful voice as in “Somebody’s eyes” and an engaging physicality which grabs your attention. There is good lively support from the rest of the ensemble of actor-musicians. 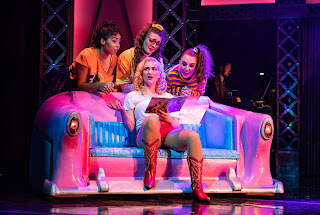 The show is directed by Racky Plews and designed by Sara Perks and the result is slick and fast-moving with some good comic touches and inventive choreography by Matt Cole using shower/locker cabinets and large tires. There sound mix in the opening songs was poor with some of the voices drowned out but improved as the show went on and had the audience on their feet at the end for a glorious encore of the best numbers in the finale including of course the well- known title song!

This is a feel-good musical, a perfect escape from the stresses of the current economic and political news feeds that take you back to a simpler time, lifts your spirits and rejoice in youthful energy and love. The tour continues until August and is worth catching on its way around the country.