For audiences nervous returning to the theater post covid or choosing between which shows to see, here is a show that delivers exactly what it promises on the poster. It’s a feel-good musical Jukebox of Sixties hits sung by a youthful energetic cast that is full of nostalgia. You can’t help tapping your foot, singing along with the choruses, and smiling at the dated references. For those over Sixty, it is a delightful trip back to a simpler time and an entertaining two hours.

The production is not a surprise with its pedigree stamped all over it. Bill Kenwright as producer and director knows how to put together a cost-effective show. Marks and Gran have written better scripts but link the songs with a very simple story of romance amongst aspiring singers. Laurie Mansfield and Decca Records know their way around the catalog of pop music of the period. The title has extensively toured in two previous editions and has been to the West End and this latest version is subtitled after the 1969 hit by the Love Affair, “Bringing on back the Good Times!” but it is the same formulaic set-up. 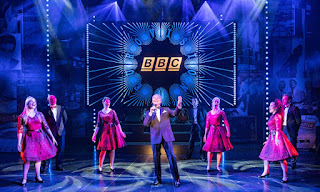 The production is little more than a concert of Sixties hits and sets itself around the stage of St Mungo’s Youth club in Essex, the dance hall of Butlin’s in Bognor, the stage of the Palace Theater in Torquay and the BBC Eurovision competition. It’s a neat trick explaining why the band is on stage throughout and why the cast bursts into song at the drop of a song title. There are thirty-two named songs, one original one and a medley from the 79-year-old Mark Wynter who had 9 hits in the UK between 1960 and 1965. As a result, the music never stops.

The premise is to follow the romances of three couples associated with the band The Conquests as they each navigate a path to singing success. Bobby (Jacob Fowler) has lost his solo nerve after a performance at the Royal Variety show and his girlfriend Laura (Elizabeth Carter) is offered her big break supporting Frankie Howerd at the Torquay Theater by her manager Larry (Mark Wynter). Norman, the lead singer (Joseph Lukehurst) has musical differences with the rest of the band and can’t resist the temptations of the girl fans, ignoring his loyal wife Sue (Lauren Anderson-Oakley). The Band manager, occasional singer and hairdresser is Ray (David Luke) whose girlfriend is Donna (Samara Clarke), a part-time fitness instructor. They can all belt out the Sixties tunes and perform the simple period choreography and each gets their moment center stage. 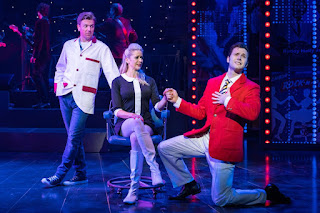 Marks and Gran have written some brilliant comedy characters in the past including Goodnight, Sweetheart and Birds of a Feather but here they are restricted to occasional gags about the Sixties (which are too dated for many in the audience) with little character development. References to Mike and Bernie Winters, Yul Brynner haircuts, Val Doonican and Frankie Howerd are only funny if you remember the originals (I do!) but they do reinforce the sense of the period! The main comedy highlights are provided by Mike Lloyd as the official Percy, the Butlins Manager and David Benson who gets a long spot as Carry-On Star Kenneth Williams hosting the Eurovision competition. It is a fine impression (for those that remember the star’s unique nasal delivery) and he delivers his song “Ma Crepe Suzette” brilliantly ringing every last nuanced laugh from the ridiculous lyrics.

The reason for seeing the show is the music and it is amazing how many of the tunes are instantly recognisable. It opens well with “C’mon Everybody” (1958) followed by “Price of Love” (1965) and “Lipstick on your collar” (1959) setting the period and the tone for the show. Bobby and Laura get to sing “Sealed with a Kiss” (1962) and Donna energetically performs “The Clapping Song” (1965). Ray gets to give us a lovely acappella version of “Blue Moon” made famous by Elvis Presley in 1956 and by football fans today! In the second half, the musical highlights are “Oh Pretty Woman” (1964) and “Keep on running” (1965) before the young cast sends the audience home with a lively upbeat Megamix. If you remember these songs, you will enjoy this show. It’s fun, nostalgic escapism, so C’mon Everybody let’s get bringing on back the good times and catch this Sixties Jukebox on its Uk Tour.