James Gaddas appears to have spent the pandemic lockdown writing and planning a tour based on one of those famous books that we have never read and about one of those characters that has become so stereotypical that we feel we know all about him. Yet Dracula’s image is perhaps more defined by the film treatments starring Bela Lugosi in 1931 and Christopher Lee from 1958 and a host of other adaptations than by a study of Bram Stoker’s 1897 novel.

Gaddas’s adaptation combines three interlinked stories around the character. First, he borrows heavily from the original novel. Secondly, he imagines that Bram Stoker’ himself stole the story from a real-life tale and changed the names and that this “real” story is recorded in various journals, letters and even a phonogram recording that he has acquired. Then thirdly he imagines he has been hired to voice a documentary for television that explores the background to the stories with “Ron”, the female producer, “Silence” the sound man and “Two meters” the Lighting man who traveled together to the Bran castle in Romania. He weaves these stories together into a lecture come dramatisation of the search for Dracula and voices all the characters in the story. 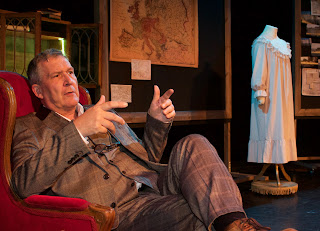 It helps in following his train of thought if you know the original story well, as his version cleverly mirrors the epistolary nature of the novel and uses letters, diary entries and newspaper articles. We meet Jonathan Harker, the solicitor who stays at The Transylvanian castle and discovers that Dracula is a vampire. Then Professor Van Helsing the man who seeks to hunt down and kill Dracula. Then Lucy Westerna, the friend of Harker’s fiancée Mina and her own suitors Seward, Quincy Morris and Holmwood as well as one of Seward’s insane patients Renfield. He takes us from the Castle to Whitby (where Stoker is said to have found the name) and where Dracula lands in England to the Asylum of Seward, a house in Piccadilly London and finally back via the river to the castle.

It is all simply staged in front of three large notice boards with images and documents like a detective’s crime wall with some period furnishing of a lecture, bureau, bookshelf, desk, a tailor’s dummy, and chests from which hes retrieve bits of evidence and which all simply but effectively contain small magic effects to create the spooky consequences of his storytelling. While they never quite have the spine-chilling effect of Ghost Story or the Woman in Black, they add to the storytelling and amuse rather than shock such as when he plays the phonogram tape it sounds more like Darth Vader than a vampire. This is however enhanced by some interesting music by Jeremy Swift and some good sound effects to add to the tension. 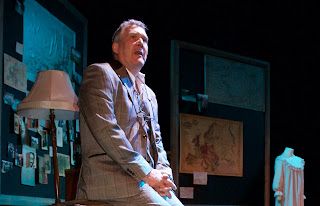 James Gaddas performs it all himself in a two-hour running time but without the aid of costume changes or character props, at times it is hard to tell which of the three-story lines he is telling but he does succeed in convincing us for a moment at least to the idea that the novel might be based on a real story or that the dramatic consequences of his film crews’ efforts happened. Director Pip Minnithorpe makes sure the stage space is well used in a varied way as Gaddas moves from the lectern center stage when he amusingly introduces the evening, to the notice boards to point out images and maps (all a little too small to have any real meaning) and to the chests for the most dramatic re-enactments.

This is a fresh and intriguing exploration of the novel which will appeal to students of the GCSE set text or adults who think they have read the book or wish they had. We don’t really learn anything about Stoker’s true inspirations such as Vlad the Impaler or the impact this famous gothic novel had on what followed or even the debate about the sexual connotation of the stories. It is simply an amusing flight of fancy which provides an entertaining evening in the theatre.

The tour continues to Wellingborough, Guildford, Leeds, Lancaster, Whitley Bay, Poole, and Crawley over the next few weeks.