Cluedo is a perfect play to get an audience of a certain age, who grew up playing Waddington board games, to return to live theater for an entertaining fun evening with plenty of laughs. It does not require them to exercise their “little gray cells” to solve the murder mystery as in an Agatha Christie play but simply sit back and let the farcical mayhem wash over them.

The origins of the play are visible throughout. It is a British play based on a US film based on a British Board game and writer Sandy Rustin and Director Mark Bell remind us constantly of this route to the stage. The six characters and six murder weapons from the Board Game are at the center of the story and are led on a merry dance around the various nine rooms of the Boddy Mansion including the secret passage. The Butler, Waddington and maid Yvette are retained from the film and Jean-Luke Worrell brings the energy and exaggerated style of Tim Curry to the stage as the Butler and is matched by Laura Kirman’s maid pretending to be French. They generate plenty of laughs as they lead the ensemble cast around the Mansion. Worrell takes his time in his delivery, savoring the silence and knowingly engaging the audience with side glances and milking each pause. They have together created a highly stylized dramatic language to stage the play with freeze frames, actors moving furniture and Keystone cop movement and chases which provide the physical comedy. 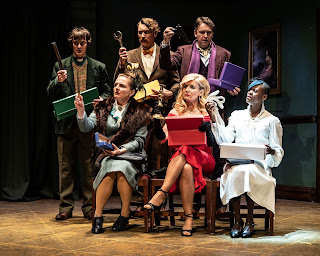 The six potential murderers are mysteriously invited to the Mansion under their familiar pseudonyms and discover they all have secrets from their lives in Westminster and Soho. It’s 1949 and the report of the Lynskey Tribunal into government corruption loosely replaces the Film pretext of the Macarthy Trials in US film. Colonel Mustard (Wesley Griffith), Miss Scarlett (Michelle Collins), Professor Plum (Daniel Casey), Mrs White (Etisyai Philip), Mrs Peacock (Judith Amsenga) and Rev Green (Tom Babbage) all have a motive for murder and are given a weapon to do it, but which is the guilty party? They are all perfectly dressed and lit in the colors of the Boardgame tokens.

The tour set designed by David Farley has to create nine different rooms as the action passes frantically from room to room. The stage opens with the Main Hall, which any player of the game will remember you keep passing through on the way to make an accusation, and doors lead to the various rooms off stage which are created by opening up the flat to reveal simple settings. This practical solution to the challenge creates some blocking issues, especially for those at the end of rows as all the characters squeeze into the space in front but the scenes are short and the action moves on quickly. There is just enough setting to suggest which room it is. 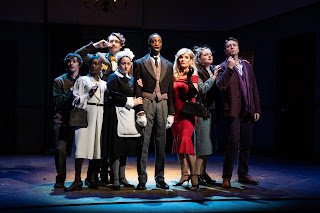 There are some wonderfully effective comic routines such as a brilliant slow-motion chandelier drop, an offstage orgy, an exaggerated death throes scene, and a silly story recap but other scenes like the overlong dining room scene or overplayed repetition of the same lines don’ t quite work. Indeed, the script is littered with witty and clever one-liners but some are lost in the delivery or misfire but there is no time to reflect as the action races on to the next sequence. My favorite lines were “Who designed this house plan? John Waddington” (of course!), “You are acting peculiarly”(aren’t they all hamming it up?), or “ I struggle with nuance” (there is not much subtlety in any of this!) or the obvious reference to a “roll of the dice” (we expected to see a giant dice roll across the stage at any time!). If these appeal to you then this is a show you will enjoy.

It’s a spoof. It’s very silly. It is impossible, I think, to solve unless perhaps you recall the Agatha Christie story “And then there were none” where the body count rises as quickly as here and not everyone is who they seem. But it does not matter, the energy of the cast, the pace of the direction and the madness of the script sweep you along so the short running time of one hour forty passes very very quickly. You can’t help smiling, occasionally laugh out loud but most of all you enjoy the shared experience of being entertained in a live theater once again.