‘Once a Century the circus wakes up’, so the tale goes in the astounding Cirque du Temps, My Aerial Home Event’s latest professional circus production.

Directed by Amanda Miles and featuring some of the brightest aerialists in the UK, famous circus performers from all around the world from the last 100 years are resurrected on the stage in a brilliant homage to the women who paved the way through the twentieth century.

The ringleader of the circus troupe, played elegantly by Malik Ibheis, demands a child (‘Little Lola’) be taken to join their troupe and be shown the ropes of the circus. While the premise itself is dark, the company’s take on it is refreshingly wholesome and tender. 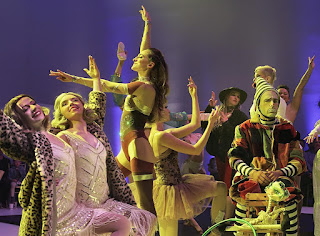 The show is easy to all, both those who are new to the circus and those Circus experts and Historians. Whilst marketing and the information-rich programs do a good job at bringing all up to speed, one could just have easily walked in off the street with no understanding of the show and still come away thrilled and beaming. Cirque du Temps is, an electric and fun-filled evening, as evidenced by the roaring applause from the sold-out venue and the genuine smiles on the performers’ faces. This is a company of performers who are not only exceptional at what they do but absolutely love every second of it.

The show is structured around a series of acts, devised by the cast, with interludes of clowning from Ibheis. It begins with Suzie Smith (portraying contortionist Merial Gaunt) on the flying pole. Smith’s flexibility and strength were truly a sight to behold. Next came Daisy Horan as tiger tamer Mabel Stark, performing a joyful straps act to a jazzy rendition of Eye of the Tiger, including absurd (but oh so fun!) interactions with cast members dressed as tigers who later mauled Horan at the end of her act.

Iryna Korniichuk plays Ludmila Schvchenko, a Ukrainian acrobat famous for her single foot hang performance over a gathering of tigers. Korniichuk was a delight to behold, making her exceptionally difficult trapeze act look effortless. Ending her routine with Schvenko’s signature single foot hang, Korniichuk then accompanies Little Lola up in the air on her trapeze, performing a touching and tender doubles act with the child actress. 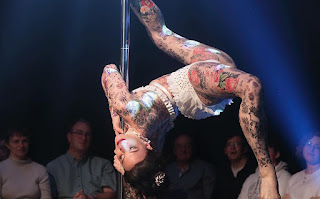 Next up is aerial duo Tabbi Rose and Mia Bloomfield, playing conjoined twins Violet and Daisy Hilton. Their doubles hoop act is touching and daring, with Rose and Bloomfield painting a vibrant and painful photo of the lives of the conjoined twins. At times they move seamlessly as one body, making it difficult to tell where limbs began or ended. The act ends with the death of Bloomfield (a nod to the real-life death of the twin), but the tension was cut with Ibhis bringing her back to life just in time to aid Amelia Marchant (playing Lillian Leitzel) in her Spanish web act. Marchant is riveting as an actor – she is expressive and present whilst performing daring spins on her web, oftentimes held up by one ankle.

Sophie Duriaux is up next as Maud Wagner, or the painted lady, perhaps the most instantly recognisable of any of the circus legends brought to life in the show. Duriaux performs a beautiful unison of static pole and static trapeze, disrobing during her act to reveal head to toe tattoos in tribute to Wagner. Duriaux’s act is equally soft and strong, her movements legato in stark contrast to the images that marched across her skin.

Rachel Enty’s portrayal of Anette Kellerman is lush, easily the most fun act of the evening. Enty is full of life on her corde lisse, playing equal parts graceful aerialist and bold clown with ease. At one point in the act, Enty falls into a paddling pool beneath her apparatus into real water and continues her swimming turns aerial routine soaking wet with a smile. Enty possess strong acting chops and is a joy to watch. 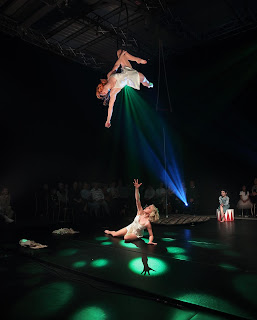 If Enty’s routine was all-around fun, Morgan Barbour and Tash Hutchinson’s follow up duo matched that energy with their intensity. Arguably the strongest act of the show, Barbour and Hutchinson were portraying Tiny Kline, an iron jaw artist and aerialist and the first woman to play the role of Tinker Bell at Disney Parks (at the age of 71!). Heavy on the Peter Pan theme, Barbour and Hutchinson were moving nonstop for the duration of their seven-minute act. While all the performers in Cirque du Temps performed death-defying feats, Barbour and Hutchinson leave you wondering if the laws of gravity even apply to them. Performing tricks that look like they simply should not be physically possible, including Hutchinson, seemingly levitating off Barbour’s feet in a back lever and ending in Barbour picking a spinning and graceful Hutchinson up with just her teeth, these two women prove that the impossible is possible. Their work, while undeniably strong and graceful, is also a testament to the level of trust high-level performers cultivate in their work. This duo operates like an extension of themselves. Where one body ends another begins, often in vulnerable positions that require absolute physical commitment from both parties. This duo are not to be missed, as they are by far the strongest act I have ever been fortunate enough to watch live. Catch them however you can! It is a partnership I hope to see much more of in the future.

Kelsey Bell ends the show with her portrayal of Annie Oakley. All attitude on stage, Bell brings down the house with a mashup of party favorite songs including Dolly Parton’s 9 to 5 and a slew of confetti guns. Bell possess an impressive stage presence and was able to keep the audience’s attention right to the very end.

Overall, Cirque du Temps is an evening of family fun that speaks to your inner child. The energy and athleticism brought to the stage by the performers are unparalleled. I look forward to seeing what this company produces next.