As theaters around the country wait to hear whether the Arts Council will include them as a National Portfolio Organization in support of the new ACE 10-year strategy to “recognise and champion the creative activities and cultural experiences of every person in every town, village and city ​​in this country, and to ensure that more people express and develop their creativity and create more opportunities for them to enjoy the widest possible range of culture”, the Watermill in Newbury is staging a perfect example in its latest production and related activities.

After a thirteen-venue outdoor tour of local towns and villages, the production of Camp Albion arrives for a two-week stay at the Watermill Theatre. Its themes of protest against authority, ecological campaigning, youth culture and mental health pressures will resonate strongly with many under thirties while the dilemma of a road system fit for purpose versus the environmental damage its construction causes will remind their parents of the difficult decisions and compromise that society needs to sometimes face. One campaigner says “it’s a protest, not a war” but at times these standoffs feel more like war than simply putting across a point of view. 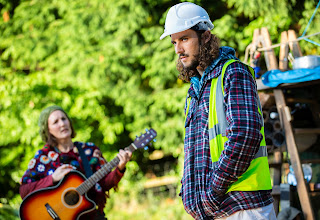 Danielle Pearson’s play is a mixture of a romantic encounter in the woods, verbatim style speeches from characters involved in the Newbury bypass protests (nine miles of road period) of 1996 and music of the such as “Don’t look back in anger”, “Ironic” and “Wannabe”. Indeed, I did not find the music choices were always obviously connected with the narrative with the helpful list of music listed in the program from Bob Dylan’s 1965 “Times are a changing” to the 2000 song “Teenage Dirtbag” and seemed more like musical interludes. than flowing from the narrative.

The verbatim style speeches set out very well the arguments around the destruction of historic woods to make way for the enhanced A34 to eliminate bottlenecks around Newbury town center with the views of security guards, protesters, local residents and the Under Sheriff. It leaves a clear impression that many campaigners were ahead of their time in their campaigning on ecological issues but also highlights the peculiar coalition of different groups such protests create. References to the real-life protestor’s camps such as Redding’s copse & Bangor Lane route the setting in the location and period. The events at the time were made public by the national and local media reporting, today of course it would be consumed in a plethora of social media that seems more effective in creating a sense of importance to the arguments. 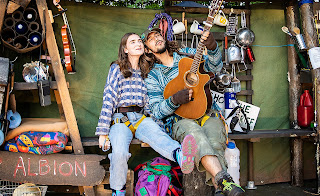 The three actors in the play do an excellent job creating the different characters with simple changes of romantic costumes and accents while playing out the central roles of the storyline that links the scenes. Hannah Brown as Cassie represents the young people torn between the usual career path and opting out to protest against the road. Joe Swift is Dylan, a serial campaigner who falls for Cassie but struggles with the mental health stress of his lifestyle choice as paranoia overwhelms him. Best of all is Kate Russell-Smith as both Cassie’s mother Viv anxiously overseeing her daughter and the contrasting character of the veteran protester Foxglove Sue (35 years including Greenham Common women’s peace camp!), who views Cassie with suspicion.

Georgie Straight as the Director ensures these elements are slickly and simply weaved together with an even pace and that the message comes across loud and clear but the play while interesting and well-staged lacks real drama. It was curious that after an outdoors tour they should have decided to stage this in the theater instead of the picturesque grounds outside the venue where they so successfully staged shows last year. The greenery of the very woods the play referenced would have enhanced the setting and added to the debate. However, the internal sound effects were wonderfully evocative and added the only real drama to the piece. 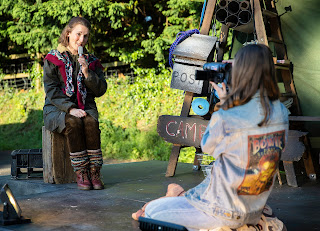 This play is worthwhile especially for those who live locally and recall the events of 1996 or for young people who are not aware of this local history, but I hesitate to recommend driving down the M4 and the very A34 bypass at the heart of the story to see it. Indeed, the dilemma the play explores remains today. The Watermill in Newbury must have benefited from the good road network to widen its catchment area, it’s virtually impossible to visit the venue without a car and so how do we change society to protect the environment while still enjoying such theatre? While, this is a show the local community should experience, and the Arts Council should take note of, its theme is still so relevant today, the local regional tour and Festival program of family workshops ticks all the right boxes.