Dorothy L Sayers British literary creation of the aristocratic detective Lord Peter Wimsey should perhaps be as familiar to British TV and Theater audiences as Agatha Christie’s Poirot, but David Suchet’s masterful TV portrayal and completely countless film adaptations have eclipsed him. It is a very long time since the 1970s and Ian Carmichael’s radio and TV portrayal which I have vague memories of, so it is perhaps overdue to see a restaging of this first story staged in 1936 and made into a film in 1940! Unlike Peter James’s rather macabre plays about Detective Roy Grace, this is a detective mystery where the emphasis is on romance and the feelings of the detective rather than the crime itself, although as it turns out it is a rather quirky and unusual murder method although the clues are well signposted throughout the show.

Lord Peter Wimsey is the archetypal British gentleman of the period educated at Eton and Balliol College Oxford and then suffering PTSD during the First World War where he met Sergeant Bunter who becomes his valet (for twenty years) before meeting Harriet Vane who he marries in 1935 In this play, we meet all three as they arrive at Talboys in Hertfordshire for their honeymoon only to discover the body of the former owner, Noakes, in the cellar. In the course of his detective work his relationships with both are fully explored and his intelligence and literary knowledge are often displayed. James Sheldon captures the quietly superior character while revealing some of his inner turmoil and regrets as well as his love for Harriet. Vane is played by Kate Tydman as a delightful loyal wife with an understanding of crime and intellect to match him and their choreographed moves elegantly portraying their love and relationship. Bunter is portrayed by George Telfer as the upright stiff and loyal servant who rather curiously gives shoulder massages to his new mistress! 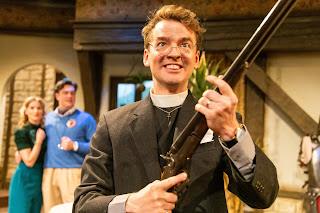 Against these three characters from the upper classes of society at the time we meet the locals and primary suspects of the murder who seem to enjoy easy access to the house! First up is the local chimney sweep Mr Puffett, played with a lugubrious bewildered demeanour who has been asked to unblock the Chimney, Is the missing body stuck up there? Then the dowdy Mrs Ruddle, played by Joanna Brookes who occasionally cleans the house, Was she the last to see him alive? Then the twittering excitable Miss Twitterton (Helen Bang) who has the spare door key and could easily have let herself in to do the deed. Followed by Frank Crutchley (Christian Ballantyne), the car mechanic come part-time gardener who claims to have lent the victim £40 that he wants back. The arrival of the kindly Reverend Simon Goodacre (Duncan Wilkins) who would not hurt a fly (or would he?) fills the house with potential, if unlikely, murderers to turn the honeymoon into a Busman’s holiday.

The local police, the well-educated Superintendent Kirk (Noel White) and the not so bright Constable Sellon (Luke Barton) enlist the help of Wimsey in interviewing the suspects and explaining the mystery which takes a surprising turn when the “fly by night” MacBride (Chris Porter) turns up claiming Noakes was heavily in debt and laying claim to all the furniture and assets. The debate turns from the motive to how the murder could be done to a man alone in a locked house and Wimsey and Vane’s elegant dance as they explore the when, where, and how of the murder. Brian Blessed directs this motley crew of characters in a fun, light-hearted, almost tongue in cheek exploration of the Detective genre. Occasionally you wish they would just get on with it as the speeches seem overlong and labored but generally, you are swept along and kept engaged by the steady revelation of facts, timings, and surprising turns. 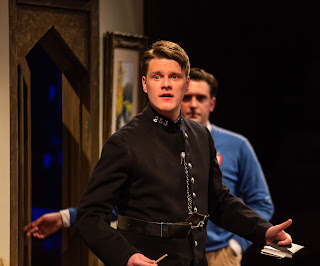 The mock Tudor house designed by Michael Holt fits neatly into the tight stage space of the Mill at Sonning allowing us crucially to see the window onto the main entrance, a dominant fireplace, and the crucial grandmother clock with every piece of furniture and setting eventually getting to play a functional role in the story. The costumes by Natalie Titchener greatly assist the establishment of each diverse character with good touches like the period Constable uniform and whistle, the trousers and belt of Crutchley and Wimsey’s monocle and embroidered Balliol College crest.

There is only one word to describe this enjoyable period detective play and that is whimsical. It does not have horror of Peter James stories or the brilliant final deduction scene of Poirot but gently reveals all with a playful sense of humour and a satisfying final explanation that leaves you smiling and quietly thinking “of course that makes sense!” It is a perfect play for the Mill at Sonning Dinner theater offering, once again showing that the Artistic Director Sally Hughes knows what her audience like to see as well as what they expect to eat beforehand in this 40th anniversary season!