The 1976 Alan Parker Film Bugsy Malone caught the attention and passed into movie folklore with its very young cast and splurge guns in creating a spoof musical based around the gangster wars of the American prohibition era and starred the wonderful Jodie Foster as the speakeasy singer Tallulah and Bonnie Langford as Lena. There was a charm and humour in the combination of the young performers and light touch delivery of such a grim and violent period of American history. It is a somewhat bold move from producers, Kenny Wax and Theater Royal Bath, to revive the Lyric Hammersmith 2015 production with a cast of young leads (aged from 9 to 15) with a team of chaperones, and an ensemble of young adults, many making their musical debuts for an extensive UK tour of the larger regional theaters which began in Bath Theater Royal in August.

When we caught up with the tour at the huge Mayflower Theater in Southampton in a one-third full stalls auditorium, there was no denying the production values ​​invested in the touring show. The false back wall portrayed the entrance to the basement Speakeasy with a beautifully coloured bar truck and flown tables taking us inside the venue with elegant ease. The car chase was also wonderfully brought to the stage with a pedal car and strobe effect lights. Indeed, there was an appropriate air of theatricality by Director Sean Holmes setting many of the show’s numbers as staged performances and with the occasional breaking of the fourth wall. When a character is shot with the splurge guns a photographer appears to capture the death and in the flash of light, the character rises and walks off. It captures the charm of the original for the stage. The practicalities of staging mean however the splurge guns are reduced to splatter guns and then finally shoot out which was a glorious slapstick scene in the film is somewhat muted. The show is very well lit by Philip Gladwell with neon signs and good use of spotlights and strobes to highlight the action. 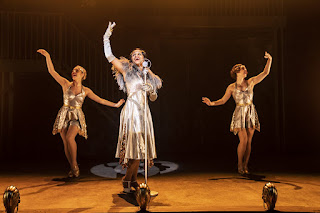 Of course, the show ultimately depends on the performances of the young leads, and we saw one of the three diverse teams, Roxy, on our visit led by Amar Blackman as the former boxing promotor Bugsy Malone who falls for wannabe nightclub singer Blousy, Mia Lakha. Fat Sam the speakeasy owner was played by Charlie Burns and his leading lady, Tallulah by Jasmine Sakyiama and his caretaker Fizzy by Aidan Oti. His arch-rival the diminutive Dandy Dan was played by Rayham Kufuor- Gray, and the seventh character was the bold down and out Babyface by Kayla-Mai Alvares. You can’t help but smile at their efforts to behave as adults and sustain the American accents. They move well, you can hear most of the words clearly and have mostly tuneful voices. But on the giant Mayflower stage, they do at times look a little lost and as young performers are still learning the stagecraft to make it look natural and make the impact they deserve. It will be fascinating in years to come to see which use this amazing tour experience to develop into future musical theater stars.

Their efforts are generally overshadowed by the excellent ensemble of young professionally trained performers who dominate the stage and are superb in the well-drilled big production numbers which show off Drew McOnie excellent choreography. The opening “Fat Sam’s grand slam” with seven girls and five boys sets the scene and the two second-half routines of “So you want to be a boxer” with a lovely, executed boxing match and the “Down and out” army are show highlights. They are step perfect throughout and also have good cameos moments in the narrative as for example Knuckles, one of Fat Sam’s hoodlums and Leroy, the would-be boxer. 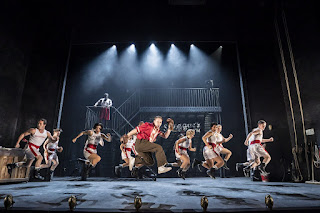 The music by Paul Williams is lively and fun and resonates the era and here is enjoyably played by a small band of six under Alan Dale. Many of the songs are instantly recalled even though it is over forty years since we saw the film and it is surprising that he is better known for his individual songwriting (for The Carpenters) and TV Themes and film scores (such as The Love Boat & The Muppet Movie) than as Musical Theater composer.

Though it is a simple story and none of the relationships really develop because the emphasis is on childish fun and humour, it is a lively entertaining show. I think in a more intimate venue with a full house, the talented young performers can have more impact when they take center stage. But most of all they will learn from the experience on the tour which continues to February 2023 and some that choose to will surely grow into future Musical Theater stars.