Bill Kenwright’s famously celebrated and award-winning production of the international hit, Blood Brothers, has been entertaining audiences since 1981 but has been re-emerging since the 14th of January 2022 in its UK tour. Despite touring the UK constantly, few musicals have been received with such acclaim and it still remains to be a box-office success; selling out in large theaters across the country and receiving jubilant standing ovations every night.

Blood Brothers tells the enchanting and moving story of a pair of twins who were separated at birth. Though they grew up apart and in different social worlds, they reunite later on in their lives but in devastating circumstances. Mrs Johnson, a young single mother, is abandoned by her husband, therefore, her as a single mother to leaving her seven children. Though she can find her feet and work a job to provide for her children, she is shocked to discover that she has fallen pregnant again, only this time with a pair of twins. Through her desperation to provide a better life for her children, she creates a secret pact with her boss’s wife, Mrs Lyons, with financial hope for the future. 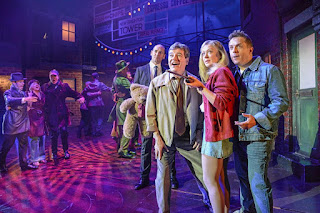 Apart from a couple of microphone mishaps, the production value of this show is spot-on. Bob Tompon and Bill Kenwright’s expertise in their direction shines through in this production. They portray a perfect balance between the naturalistic intense moments and the stylistic choreographic moments. Both sides are equally important and are successful in creating necessary emotion onstage. The only negative comment I have to make within their direction is the confusion around the role of the Narrator. Though Robbie Scotcher commands the stage and has a beautiful rock sounding voice, the character leaves the audience quite confused at his relevance to the plot. The full sound of the band creates a stunning ambience, thanks to the work of Matt Malone. As a fan of the woodwind sound, the tone of Richard Wimpenny’s saxophones are a personal highlight and are fundamental to the beautiful sound of the production. 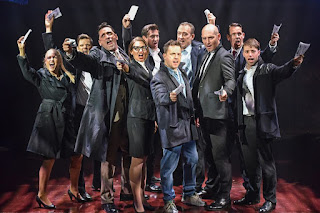 This production is spell-bounding; Will Russel’s clever writing makes an almost 3-hour musical feel seamless and ever-engaging. Nicki Evan’s portrayal of Mrs Johnson is immaculate; The collaboration of the stamina of her vocals and her artist are a force to be reckoned with, especially in the final scene where we see her character fall into an emotional state of devastation-leading to a well-deserved standing ovation. Even though Evans’ skills as a leading lady have been raved and acclaimed for many years now, there is another spectacular young actress in the cast: Carly Burns. Burn’s portrayal of Linda shows the journey of an innocent seven-year-old girl all the way through to a wife of a mentally ill husband and a mother of a young child. Burns’ presentation of the role is realistic, truthful, emotional, and in my opinion the stand out individual performance of the show. The relationship between the twins: Mickey (Sean Jones) and Eddie (Joel Benedict), is humorously crafted, age-appropriately and sensitively between these well-established actors. The ensemble is very strong, slick and committed to their roles in the company.

There is very little to critique in this production, and it is a wonderful experience to embark on, regardless of whether you are a Bill Kenwright fan or not. This piece is incredibly moving, humorous, celebrates feminism and explores the struggles of single motherhood. ‘Blood Brothers’ is running at the New Wimbledon Theater until February 12th 2022, but is available in theaters across the UK until September 3rd 2022.