The Watermill in Newbury has its own style of production that now seems to dominate each season’s programming. On the one hand, they present actor-musicians musicals like Our Man in Havana, Wicker Husband & Assassins, on the other hand, they stage new wordy comedy shows like Wipers Times, Trial by Laughter, and Spike. They set generally high production standards with clever settings and good ensemble casts that make the most of the intimate auditorium. There is however a slight sense that the creativity is being stifled by the familiarity with the style of shows they programme.

The latest offering is Bleak Expectations, a modern reimagining that borrows from Charles Dicken’s narrative style novels of Bleak House and Great Expectations and builds a tale about Pip and an escaped convict who becomes his benefactor and saviour. Written by Mark Evans, there is a whiff of Cambridge Footlights revue about the fast-paced episodic format combined with the smugness and “too clever by half” writing of Monty Python’s Flying Circus and like both of these when it works it is excellent but the two fifty-five-minute acts at times drag as the storytelling is stretched from its original format of 28-minute radio episodes. The production seems to say laugh if you are clever enough to get the reference and there are plenty of laughs, but the parody of Victorian melodrama and sensibilities does at times wear thin. 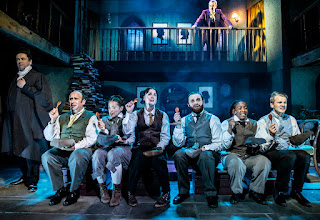 Director Caroline Leslie, who previously directed Wipers Times and Trial by Laughter at the Watermill ensures the cast plays it all with a straight bat, knowingly engaging the audience with a stare that says I know you are going to laugh at this gag, but I am not going to corpse. There are amusing theatrical moments like Sir Philip Bin’s entrances on a chair slid on from stage right and interacting with a stagehand, or the Victorian silhouette pictures that come alive or the actors’ reaction to the idea that he might meet another character played by themselves. The set by Katie Lias (who also designed Spike) is effective with a pile of old books becoming a staircase to the balcony and neat tricks to switch scenes quickly, like graves stones folding up from the stage and an alcove that doubles as an entrance. It sets the tone for the production well.

The cast of nine looks like they are having fun with the material. Nicholas Murchie makes a wonderful Victorian raconteur, Sir Philip Bin, delighting in his lines with a sparkle in his eyes much as you imagine Dickens might have done on his speaking tours. Dom Hudson plays Sir Philip’s younger self known as Pip with an earnest innocence and a jaunty step. His two love interests are played by Alicia McKenzie as Flora Dies-Early and Caitlin Scott as Ripely Fecund, their surnames foretelling the outcome of their romances from the start! Simon Kane plays the anything but Gently Benevolent, a dastardly Victorian melodrama villain with a multitude of ridiculous disguises, allowing him to overact to great effect. JJ Henry doubles up as Pip’s friend Harry Biscuit and the aptly named Mr Parsimonious who always appears bearing gifts and a grin. Colm Gleeson has three roles including the escaped convict who makes good and Bakewell Haverwitch whose appearances change Pip’s life. It is left to Dan Tetsell to play a host of related Dickensian antagonists as members of the Hardthrasher family who seek to thwart Pip’s best endeavors. Every character captures a sense of being plucked from a Dicken’s novel although you can’t quite put your finger on it together with lines that sound like they are borrowed too like “Can I have some less” in an Oliver like plea over the food. 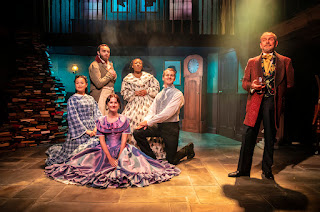 The result is a slightly bizarre madcap story packed with gags and one-liners that I suspect if you have a deeper knowledge of Charles Dicken’s writings will resonate better than those of us with a passing knowledge fuelled by screen adaptations rather than a study of his books . In his forward in the program Mark Evans says people ask “Why (the hell) did you write Bleak Expectations?” and he ignores or responds robustly to those who add the “the hell” part. Which camp you fall into will depend on how much of this ridiculously plotted pastiche you recognise as a parody of Victorian England and how much feels like schoolboy/student humour which is amusing in small doses. To avoid his displeasure, I find myself sitting on the fence, but you can’t fault the idea or the effort.