Billy Elliot, based on Stephen Daldry’s acclaimed film from 2000 tells the story of the community, acceptance and one boy chasing his dream against all the odds. After its many successful years in the West End, Billy Elliot finally makes a long-awaited return in a new re-imagined production from director Nikolai Foster and choreographer Lucy Hind at the Leicester Curve.

What has and always works for Billy Elliot is how it’s one of the very few productions that manages to make the transition from screen to stage so well. It takes the memorable moments from the film and adds in an array of musical numbers (music from Elton John and Lyrics from Lee Hall). Combined it becomes a musically catchy and enlarged version of the beloved film.

Once the curtains come up, an empty and stripped back stage appears, with just a few gates and some scaffold poles. It gives the audience an industrial setting reflecting the minor strike and creating a sense of realism. The focus as a result is spent on the actors and not the surroundings. A clever setting choice from designer Michael Taylor.
As for the show itself, its strength works in its numbers, particularly the scenes involving the cast as a community. The many numbers involving the minors were powerful and unforgettable. Albeit a nearly hefty 9 minutes long, ‘Solidarity’ is easily the standout song in the show. Filled with an immensely talented cohort of young children, trapped between the class divider depicted by the rest of the cast.

Though if we’re looking at individuals particularly then a few need to be praised. Of course the titular character firstly, Billy (Jaden Shentall-Lee) was superb. Perfectly embodying a young boy who has a dream to chase but struggles in a town that appears so gassing it. Shentall-Lee’s moments on his own were a joy to say, ‘Angry Dance’ and ‘Electricity’ showcased just how talented this young boy really is. Other mentions to the other Elliot family members, older brother Tony (Luke baker) and Dad, Jackie (Joe Caffrey). Both played their characters so well, allowing the audience to share their frustrations and question as to why they’re stuck in their ways and can’t support Billy’s dream. However, as the show progresses they begin to show a different side and we begin to sympathize. Finally, praise to Mrs Wilkinson (Sally Ann Triplett), Billy’s dance teacher. The pair have wonderful on-stage chemistry and a natural bond that’s instantly heartwarming to watch, any scene with the pair together is moving, comical and joyous. 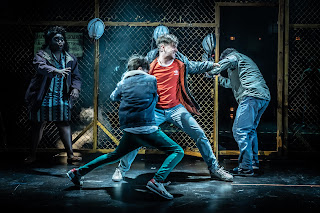 It’s very difficult to get this show wrong, providing you stick to the formula of its previous successful productions then it’s a sure win. With powerful and touching moments throughout, Billy’s interactions with his mum and the scab collecting the audition money to name a few. However, with this being a re-imaging it, unfortunately, seemed to miss certain points that the predecessors got right. Some aspects of the new production appeared almost too 21st century, the Primark slogan Christmas jumpers missing the mark along with Billy’s Mum appearing too young and modern as if she’s almost from the future rather than the past. The production itself possibly being a victim of trying to re-invent itself as a ‘new’ production may ultimately be the reason it didn’t quite perfect re-defining the classic humour and dances without changing it enough to be original.

Taking nothing away, it’s a heartwarming and energetic production about chasing your dream and the coming together of a community that will leave you wanting to dance right out of the theater all the way home.