The musical that started Disney’s screen to stage path, Beauty and the Beast returns to the West End after touring the UK in a new production at London’s famous Palladium. This 1991 animated classic is a staple for any Disney fan and is a perfect film for a stage adaptation, the West End hasn’t seen this show since 1999 so its return is very much welcome!

In this new production, directed and choreographed by Matt West, the Disney magic fails to translate onto the stage. That classic spectacle we expect from a huge Disney production is still there but lacks drama and power, for example, the wolf chase scenes are done with projections and whilst the design and illusions are impressive they feel empty and too reliant on the projected images to do the work. The same goes for the big group numbers, whilst ‘Gaston’ was absolutely brilliant, the big show-stopper ‘Be Our Guest’ fails to really give us the punch we want. The cast works very hard but the overall design of this number doesn’t enter us into the world of Beauty and the Beast and the everyday objects who breathe life, instead we have people in top hats and tails in a tap number.
The acting side of the show was really disappointing, it felt very artificial and we weren’t drawn in to believe the action or characters. At times, it felt very amateur with overly dramatic arm movements to express emotion and line readings that felt unnatural.

Courtney Stapleton takes on the role of Belle and whilst she looks the role we lack the essence of the character that we know and love from the film. The non-traditional Disney Princess who stands up for herself and is an intelligent independent woman seems slightly wobbly and a little empty. Although her version of ‘A Change in Me’ was absolutely beautiful. Shaq Taylor stars as the Beast, and whilst his character was well rounded his text felt disjointed. I get the feeling there is a lack of direction and guidance in the scenes and characters, which falls back on the director rather than the performers. The text is as important as the songs.

The standouts of the evening come from the supporting roles; Sam Bailey as Mrs Potts is simply marvelous, she has moved away completely from what people know her for and shows her talents as a true musical theater performer. She is unrecognisable and captures that essence we all know from the original movie but adds her own motherly warmth to the role. Louis Stokil (Le Fou) and Samanatha Bingley (Madame) are stars in the making and even in small roles, are the highlight of the evening. Stockil brings so much comedy to the role and our eye goes to him whenever he’s on stage, his role in the big group numbers brings us exactly what we want and he is by far one of the finest performers in the show. As a young actor making her West End debut, Bingley shows a level of professionalism and talent beyond her years. Brilliant comedy skills and a characterisation I couldn’t take my eyes off! 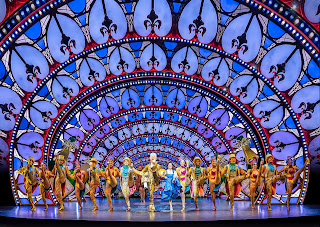 Ann Hould-Ward designs the costumes for the piece having also designed the original production, she breathes a fresh new life into the designs we’re already very familiar with but still captures the original source material so well. Stanley A. Meyer is the scenic designer on the production and whilst some parts were incredibly innovative, like the town and elements of the castle interior, the design of ‘Be Our Guest’ left us wanting more. I feel a little too much emphasis was on the projections, which were beautiful, but lacked in spectacle.

I must note that it felt wonderful to see diversity in this casting, as a musical that will attract a number of young children this feels monumental. To also have merchandise match the actors on stage, is truly wonderful and Disney is paving the way for future productions to follow.

Overall the show is lovely and is a wonderful introduction to theater for the younger generation but as adults who know what Disney are capable of on stage, it is a slight disappointment. With characters feeling a bit 2D and design elements giving us more Pantomime than expensive musical spectacular, the production doesn’t live up to the expectation.