Neil Simon’s 1963 comedy Barefoot in the Park was made famous as a film with Robert Redford and Jane Fonda as the newlywed couple Paul and Corrie and has been acclaimed as one of the funniest comedies ever. It relies on the two central performances to ring the most laughs from the simple plot that explores their relationship in the second week of their marriage. The Mill at Sonning’s latest production which runs until 20th August and is directed by Robin Herford is fortunate to have two such actors.

Hannah Pauley, raised in the United States, easily fits into her role as the enthusiastically in love Corrie. From her first appearance bouncing around the empty compact sixth-floor apartment in excitement, awaiting the arrival of her furniture and her new husband from work, she convinces us that she is head of heals in love, full of optimism and an independent free spirit with great facial reactions and a winning smile. As the play progresses, we feel the mood change with growing self-doubt and we will her to find the joy in life again that made her want to walk Barefoot in the Park during a New York winter. 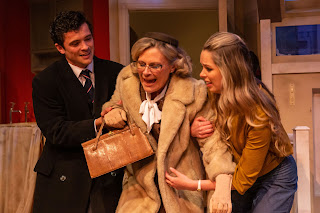 Jonny Labey is her husband Paul who is a career-focused and stuffy lawyer finding it hard to adjust to the conflict between his work pressures and his obvious reciprocation of her love. He too has to show a full range of emotions from being drunk, having a heavy cold, raging with anger and being frightened and was very engaging in the role. He handled each transition very smoothly, so we were convinced by the mood changes and accepted the logic of his reactions.

They are joined by three excellent supporting cast members each creating distinctive characters and playing the roles straight and believably but still getting the laughs from the clever script. Rachel Fielding is Corrie’s mother Mrs Ethel Banks working hard to say what is best for her daughter who is simultaneously trying to do what is best for her mother. Her entrances up the six flights of stairs offstage are handled with great comic physicality. James Simmons plays the creepy oddball Victor Velasco who somehow charms the ladies with his peculiar ways and tastes and Oliver Stanley plays the telephone engineer Harry Pepper who comically observes the couple’s relationship while fixing the phone. 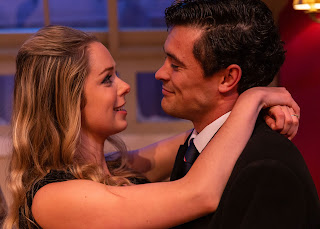 Michael Holt’s set design for the intimate Mill stage certainly captures the sense of a compact New York loft apartment of the sixties minimally furnished but with plenty of practical features to interact with. If anything, the restrictions of the stage size hamper the overall impression with a curious step up from the entrance door, a screen for the Kitchen that blocks the fridge door, an unnecessarily tight front edge to the acting space set further back than normal at the venue and a broken window which does not quite allow the snow to fall visibly into the flat. However, the Act 1 to Act 2 scene change was handled very effectively in the half-light as part of the storytelling. Unusually the photographs in the excellent program capture all the best moments of the play so don’t study them too closely before if you want to be surprised by developments!

This is a first-class production of this classic American comedy showcasing the witty script and very well acted throughout. It may contain some heavy gender sixties stereotyping with a hard-working husband and a predatory male lothario opposite a ditsy hyperactive blonde wife and overbearing lonely mother, but the quality of the writing and the performances under Herford’s strong direction sweeps you along with a well- judged pace, good comic timing and some very amusing physical business. The result is another thoroughly entertaining evening at The Mill at Sonning, after its usual offer of a Steak pie and cheese and biscuits two-course meal. Another very satisfying visit to this lovely venue.