The portrayal of Ava Gardner’s story in this performance is a pivotal example of how women are far more interesting than just being partners and wives to the men they are associated with; despite how society views them. Gaby Dellal’s and Elizabeth McGovern’s adaptation of this story stays true to the key points of Peter Evans’ 2013 novel: ‘Ava Gardner, The Secret Conversations’. Both the original novel and the newly written play expose the reality behind the glamor and success, conflicts within marriage, and the lack of consistency between male and female actors within the film industry. After all, Ava herself says ‘Men would win awards for the life that I live.’

This powerful one-act play delivers an in-depth exploration of a fading star of Hollywood’s golden age. From the safety of her London home in the 1980s, Ava Gardner hires journalist Peter Evans to write her biography in order to bring her a greater income. While Evan’s is set on his idea to create a classic ‘rags to riches’ novel, Ava is determined to tell her story in her own way; not to be skewed by the way the film industry has shaped her to be since she was 18 years of age. Ava then exploits the reality of her marriages with her three ex-husbands: Mickey Rooney, Artie Shaw and Frank Sinatra. 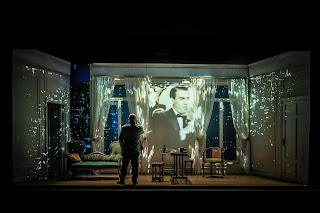 The production value of this performance is exceptional. ’59 Productions’ specialises in the design and integration of animation and projection into live performance and artistic environments. The use of the projection of the black and white videos brings this play to an extraordinary level and adds an extra dimension to the audiences’ experience. This is especially moving in the scenes where the production team uses projections of Ava’s film footage and her photos with her different husbands. Elliot Griggs and Ella Wahlström’s use of lighting and sound is impeccable and necessary, without stealing focus from the naturalistic action happening on the stage. This being said, the use of a raised stage, glazed lighting, voiceovers and projections, creates a non-naturalistic element as though the audience is watching the play through a camera lens. This is a very clever and appreciated touch, as it is metaphorical for how Ava Gardner lived her life.

Even though McGowan’s writing is witty, funny and accurate to the original text, I do feel as though it is disjointed in parts and lacks a little shape. It feels as though there is little build to the climax, leaving the conclusion of the play a little confusing. On the other hand, the ambiguity of the ending could be a deliberate decision; a reflection of Ava Gardner’s tarnished and damaged life. 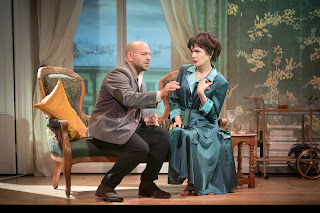 Dellals’ direction of the play is faultless for the most part. The energy within the audience was well sustained and focused, and it was lovely to hear other members laughing along with the wittier moments. This is evidence of Dellal’s strong and clear direction. There is very little to say about McGowan’s’ exemplary performance as Ava Gardner; she is a true master of her craft and embodies a beautiful yet tragic version of this damaged woman through various stages of her life. Anatol Yuself plays the male roles of Peter Evans, Mickey Rooney, Artie Shaw and Frank Sinatra. Even though Yusef had a slow beginning and took a little bit of time to warm into his performance, he had a natural and flowing rapport with his counterpart. Yusef makes decisions within his four characters, which made them easy to define from one another and the different uses of voice and accents were faultless. This is a true assert of the work created by Sam Lilja, who was the dialect coach on this production. Yusef is a natural and elegant mover who was beautiful to watch in the choreographed sections by Gemma Payne.

There is very little to critique in this production, and it is a wonderful experience to embark on, regardless if you are an Ava Gardner fanatic or not. This piece is incredibly moving, humorous, it celebrates feminism, and explores the power and the struggles of womanhood. In truth, it exposes the tragic reality of a movie star who finds comfort within her own home, alcohol abuse and the freedom of being barefoot. ‘Ava: The Secret conversations’ is running at the Riverside Studios until February 10th 2022.