Robert Icke’s bold reimagining of George Orwell’s 1945 novel Animal Farm could not be more timely or relevant as the famous allegory for the Russian Revolution of 1917 and the corruption of ideals by power feels all too real with the events in Ukraine and the irrational statements of the Russian President. The steady horrific fall from Major’s strong idealistic vision embodied in eight commandments including “all animals are equal” and “Four legs good, 2 legs bad” (excepting all birds of course) to Napoleon’s rewriting of history and just one commandment, “all animals are equal, but some are more equal than others” is stunningly and clearly portrayed by the cast of fourteen with thirty puppets.

The animals’ characters and physical presence are brilliantly captured by Toby Olie’s extraordinary designs and Daisy Beattie’s supervision of their creation (she gets a stage embodiment as the young calf at the end). The relative scale of each creature and the way they move and react is carefully recreated on stage so that you focus on them and not the puppeteers dressed mainly in black alongside them. The pre-recorded voices of each animal including such famous names as Juliet Stevenson and Robert Glenister are cleverly played in as part of Tom Gibbon’s complex sound design which uses speakers along the forestage to give direction to the voices. They are supplemented by the animal sounds created live by the puppeteers. The combination of the physical presence, strong voice characterisations, and animal sounds gives each creature a distinctive voice that we can emotionally engage with. Indeed, the young people in the row behind me audibly gasped as one after another was lost in battle or executed as the story progressed. 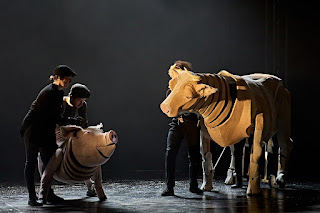 Only Jonathan Dryden Taylor in the cast is identifiable as the character Farmer Jones who sets the scene carrying the carcasses of the pigs across the stage and swigging from a flask before the show in sharp contrast to the comical scene when he is driven out of his farmhouse by the hens and pigs. The rest of the cast are hard to identify as they work their magic in the shadow of the puppets. The best of the large creatures is Boxer the hard-working twenty-eight-year-old Clydesdale who tirelessly strives to support the community even when shot, causing him to limp. The pigs too are cleverly created with a puppeteer acting as the back legs and an articulated body allowing realistic movement. There is a good contrast between the pigs: Squealer, the Pravda like a purveyor of fake news, Snowball the hero turned outcast and Napoleon, the monstrous villain of the piece. Yet there are delightful moments of light relief with Barbara the gossipy hen, Suzanne, the rather dim-witted sheep, and fluttering birds.

The staging by Bunny Christie is simple with a black brick wall on which are projected in white letters the different scenes, timeframes and deaths and clever use of the mobile barn walls to enable fast-moving scene changes or entrances of puppets. The story spanning several years is naturally episodic with some quite short scenes, but the set-piece battles to defend the farm are graphically recreated. Smaller puppets are used to portray some scenes like the plowing of fields, building the windmill or the farm buildings. These are less effective than the main scenes on the open stage but provide variation and depict key narratives. The use of classical music builds tension and underscores the action. 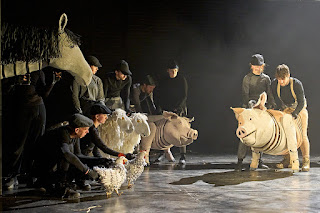 The production is by the Children’s Theater Partnership but although young kids will be enthralled with the staging, teenagers will love the visible depiction of their GSCE set text, it is the adults who will engage and be moved by the clear allegorical messages. Orwell may have intended this story as a parody of the Russian Revolution, but his writing finds parallels in so much of history whether Hitler, the Chinese cultural revolution, Kim Jung On, Trump or Putin where absolute power corrupts and endangers humanity and where it runs without check or counterbalance. The outcomes in Animal Farm are horrific as Icke’s production spells out and the final result, an unlikely alliance, is equally shocking but serves as a timely reminder of the care and diplomacy required now to find a good outcome for the current crisis some 75 years after Orwell wrote his book.

This wonderful production is definitely worth seeing on tour in the UK until May, by when we must hope that the current episode crisis will have passed, and we can reflect on another past of history with lessons learned.