Lost Dog is an extraordinarily creative Company, and it was a stunning experience to see their latest work at Corn Exchange Newbury before it goes on to Norwich and Nottingham in May. In many ways it has to be experienced to fully appreciate the work and neither the handbill of an actress covering herself in clay nor the Brochure descriptor of Dance do it justice. It is a slickly choreographed multimedia performance with a brilliant soundtrack and an presentation style that tells in a fresh and innovative way the core story unusual of Charles Dickens’s Tale of two cities. Its ninety-minute running time passes very quickly as we become fully absorbed in the performance.

The story explores the life of Charles Darnay and his wife, Lucie, their daughter also called Lucie and their son Sydney and Darnay’s escape from the guillotine after being found guilty of treason. A critical figure in Darnay’s life is Sydney Carton, who looks like him and gets him acquitted from an earlier trial before declaring his love for Lucie, Darnay’s wife. Interweaved in their plight is the story of the Marquis St Evremonde, Madame Teresa Defarge and Dr Manette (Lucie’s father). It is an epic tale set against the background of the gruesome French Revolution from 1775 to 1793. The innovative style of presentation is that the period story is told in modern costume, with Lucie’s videography projected downstage right on a large TV screen and on the ceiling of the house upstage with very cleverly inserted pre-recorded videos effectively adding to the drama. Some of the storytelling is through exposition, some through enacted scenes and at critical moments through carefully choreographed modern movement and mine to a beautifully poetic underscore. At Newbury, the multimedia assault on our senses is enhanced with a BSL interpreter signing the spoken word and underscore. Occasionally the lip-sync was off but that should not detract from a fascinating technical performance.

Darnay & Carton are played by Hannes Langolf capturing through his movement and expression the torment and love his character experiences. John Kendall plays Sydney but also performs a superb three-and-a-half-minute dance sequence of Evremonde in his death throes on a noose while the onlookers watch. It’s a gruesome thought but compelling to watch. Valentina Formenti plays the mother torn between two men with a simmering passion. Temitope Ajose-Cutting plays Defarge with a powerful stage presence and dramatic dance moves. But it is Nina Madelaine who led the piece as the videographer, sometimes talking wittily directly to the, sometimes from behind her camera and then in some beautifully audience conceived dance and a wonderful final folk lament. Clare Edwards as the BSL interpreter is as much part of the piece acting out the whole story for those who are hard of hearing and giving it another dimension as well as making it more accessible. It is a remarkably engaging performance and was fully appreciated by the party of young people in the front row. 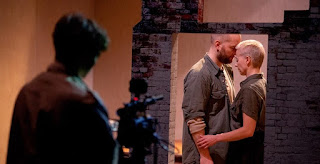 Ben Duke directs the performance cleverly using the unusual set design by Amber Vandenhoeck to create various locations, add some magical changeovers between live-action and video and keep the action flowing. It is a complex story but somehow the storytelling keeps us engaged and occasional recaps make sure we are on track. The sound design by Hjorvar Rognvaldsson to whom the show is dedicated is exquisite from dripping water to dramatic underscore and soaring dance. It is the magic that holds the whole show together. The show could perhaps have been 15 minutes shorter or broken into two acts and been 15 minutes longer for audience comfort and we could have seen projected dates to help keep track of the time shifts but it works as it is and was a joy to see.

Don’t decide on the handbill or brochure, look for the @LostDogDance social media promotional videos which give a compelling glimpse of what is in store and try and catch it later on tour.