Agatha Christie remains the Queen of Crime and her 66 detective novels are still masterful examples of the genre today. She adapted several herself very successfully for the stage including of course both Mousetrap (in 1952) and Witness for the Prosecution (in 1953). Indeed, both are still in the West End today. The latest production of Witness for the Prosecution which started in 2017 is a wonderful atmospheric production. The tour of A Murder is Announced (written as a book by Christie in 1950) which has wound its way around the county visiting over 50 venues before arriving in Woking, started too in 2017 and many of the same cast are still involved. Adapted from the book by Leslie Darbon in 1977 the stage version is a slow burner with a complex plot of hidden identities and plenty of exposition without any of the truly great characters of Murder on the Orient Express or any of the thrilling moments of Witness for the Prosecution. It seems at times to be uncertain whether to play it for laughs and even the (spoiler alert) two deaths lack drama, one played out on a darkened stage and the other comically overplayed.

It is set in the “two drawing rooms” of an early Victorian House in Chipping Cleghorn which on the wide New Victoria stage is a sprawling room in which all the chairs seem lined up in a straight line across the mid-stage, good for the audience to see the characters who are often sat down but rather unconvincing as a realistic residential room. Worse still from my seat, I could not see the stage right wall which I believe another exit to the Garden and where two shots embedded themselves in the wall. Characters temporarily disappeared from sight as they moved towards this wall. Furthermore, the full box set had no masking above it allowing us to see through to the rear wall and into the stage left flies which distracted from the otherwise well-dressed set. 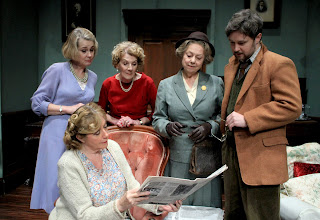 It must be quite a challenge for the cast of twelve to sustain the performance levels after such a long tour and there was a sense that on the opening night in Woking they were walking through their paces in a rather mechanical way. True the clipped fifties received pronunciation English speech patterns were still there creating stylized delivery of the lines with good diction and projection by the majority of the characters and highlighting the comical foreign accent of Mitzi (Lydia Piechowiak who has been in the cast since July 2017) but it made the whole play feel slow and dated. Also still treading the board from the original July 2017 cast were Lucy Evans as the seductive Julia Simmons, Will Huntington as her brother Patrick Simmons, Tom Butcher as the local Inspector Craddock, and Jog Maher as Sergeant Mellors. Sarah Thomas now plays Miss Marple having previously played Dora Bunner but not quite erasing the memory of Julia McKenzie, Geraldine McEwan, Joan Hickson or Margaret Rutherford who created the character on screen.

The current cast also included Barbara Wilshere as the owner of Little Paddock, Letitia Blacklock, Karen Drury as her old school friend, Dora Bunner, Emma Fernell as the local widowed gardener Philippa Haymes, Dot Smith as the elderly Mrs Swettenham, Tom Gibbons as her son Edmund Swettenham and Luke Rhodri as the Swiss national Rudi. They all gather in the two drawing rooms around 6.30 pm on Friday 13th October when the local Gazette personal column says a murder will take place at the time assuming, or perhaps hoping, it’s a joke to be enjoyed. The action thereafter is rather static as the Inspector interviews them all together and then we gradually have the clues revealed to their true identities and the plot. 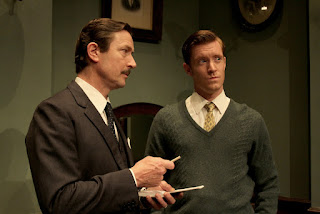 As one character says towards the end of the play “I don’t know who anyone is any more” but the problem is that we don’t really care who they are either. Anyone familiar with the structure of Agatha Christie’s plots will be ahead of the game when a character goes off to collect a pot of pills or when Miss Marple goes missing so the twists don’t come as a surprise. It must be assumed that this tour has been a success as it has continued for so long providing much-needed employment for the cast and crew, but the adaptation from the original book and direction by Michael Lunney and perhaps fatigue meant that this production fails to hit the theatrical heights of Witness for the Prosecution at the County Hall or Murder on the Orient Express at Chichester and Bath, and which set standards that other Christie adaptations are inevitably measured against. However, for Agatha Christie fans A Murder is Announced is another clever premise with plenty of clues dropped to test the “little gray cells” in the race to work out whodunnit.