For the past few months, I have had the great fortune to work on processing the Paul F. Stiga Collection of Stage and Costume Design. Though not professionally associated with the stage, Stiga cultivated a love of design and throughout his life costume and set design renderings from a wide array of performance genres. The resulting collection includes over 2,700 renderings from plays, musicals, operas, ballet, film, and television from around the world created by some 900 different designers. From authors to productions to the designers themselves, the Stiga Collection provides portals to thousands of stories. To celebrate LGBTQ+ Pride this month, we will take a closer look at three designs from this collection and what they can tell us about LGBTQ+ history.

In consideration of our first work, Finlay James’s design for a 1979 production of The Importance of Being Earnest, my thoughts immediately shifted to the play’s author, Oscar Wilde and the events that took place when the show premiered at the St. James Theater in London on February 14, 1895. With three theatrical successes in as many years, Wilde seemed poised to cement his hold on London’s theatrical box office. The plot focused on a pair of romances that hinged on mistaken identities and long-lost siblings, all conveyed with the biting wit that had become Wilde’s trademark. Within three months of its opening, however, Wilde was arrested on charges of “gross indecency,” and the show quickly closed. Wilde’s affair with a man, Lord Alfred Douglas, precipitated his arrest, and he spent the next two years incarcerated. When he was released, Wilde moved to France, and never returned to England.

It is in France that we find our next piece from the Stiga Collection, Jacques Marillier’s set design for Les Garçons de la Bandean adaptation by Bernard Giquel of Mart Crowley’s The Boys in the Band. Its plot revolves around a group of gay men who gather in a New York City apartment to celebrate a birthday, and the show’s depiction of gay male friendships was groundbreaking for its time. Les Garcons Opened at the Theater Edouard VII in Paris on September 12, 1969, roughly a year and a half after Crowley’s play premiered Off-Broadway at Theater Four. The Paris production ran for little over a month, but the original Off-Broadway run lasted more than two years with over 1,000 performances. The production was still running in late June 1969 when, three miles downtown, police raids at the Stonewall Inn sparked mass resistance. And it was still playing when the first anniversary of the riots were commemorated with the first Pride march. Throughout the nascent beginnings of the modern LGBTQ+ rights movement, The Boys in the Band played on. 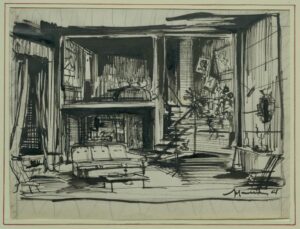 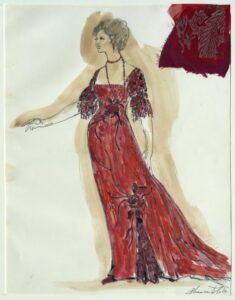 We’ve touched on the lives of playwrights and plays, but the next story from the Stiga Collection looks at the life of a designer, Florence Klotz. The Library is already fortunate enough to hold several hundred costume designs by Florence Klotz, but Stiga’s collection adds 15 more renderings to the Library’s treasure trove including a design she created for Elizabeth Taylor in the film version of Stephen Sondheim’s musical A Little Night Music (1977). Klotz was nominated for an Academy Award for her work on the film; she had won the 1973 Tony Award for Costume Design for the musical’s original Broadway run. One of the producers on that Broadway production was Ruth Mitchell, Klotz’s longtime life partner. The two worked together on several Broadway productions beginning in 1951 with The King and I, where Mitchell was a stage manager and Klotz assisted costume designer Irene Sharaff. Mitchell worked with Harold Prince, the director of A Little Night Musicon dozens of Broadway shows, many featuring costume designs by Klotz.

These three designs provide the barest glimpse of the stories discoverable in the Paul F. Stiga Collection of Stage and Costume Design. For more LGBTQ+ stories in the Music Division, be sure to check out this resource guide.