Earlier this summer, a few of us from the Music Division led a virtual tour focusing on some of the compelling visual materials in the Library’s special collections. Senior Processing Technician Melissa Young sparks up conversations with six Music Division staff members as we take a peek into a few of the more unusual and colorful graphic aspects of arts documentation.

The tour kicks off with Archives Processing Technician Rachel McNellis and a look at a 12th-century music manuscript. The chants documented in this source include music for the religious season of Advent, which begins with an elaborately decorated initial “A.” Much of the musical notation we use today was still being experimented with at this time, including the solfege system. (For more on early solfege systems, check out Rachel’s earlier post on the Guidonian hand). Rachel showcases manuscripts created during the middle ages when the universe was conceived as a musical body whereby planetary spheres rotated around each other, creating harmonious sounds.

Next up is yours truly. I talk to Melissa about what kind of information can be found in a costume design. We do a close reading of one of Florence Klotz’s designs from the original production of Stephen Sondheim’s Follies (1971) and ask ourselves what the design can possibly tell us about the character. Looking at a rendering from Gioacchino Rossini’s opera La Cenerentola, a Cinderella story, we can take in the sour expression of the character and the garish gown and make an educated guess as to which character is represented. The design many do not identify an artist or production, but there is little doubt who is being portrayed. 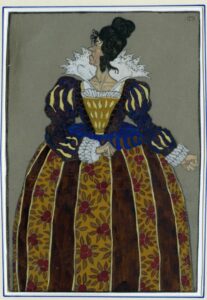 Taking us from costume design to stage and lighting design, Archivist Janet McKinney discusses the work of Peggy Clark. Although Clark became known as one of the foremost lighting designers in the United States, early in her career on Broadway she was the technical director for the 1944 musical On the Town (music by Leonard Bernstein, lyrics by Betty Comden and Adolph Green). This marked the first of her many collaborations with set designer Oliver Smith. Janet highlights Clark’s technical drawings from this production as well as Clark’s lighting designs for Agnes de Mille’s choreographic work Fall River Legendthe gripping tale of accused murderer Lizzie Borden. 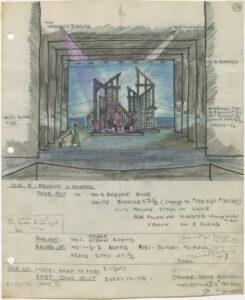 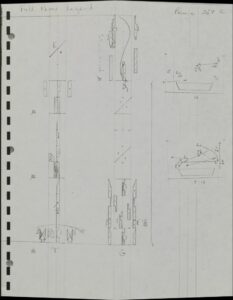 Fall River Legend appears again in Melissa’s conversation with Dance Curator Libby Smigel. Libby points out a score for de Mille’s Fall River Legend which uses Labanotation, a system of geometric diagrams, to visually represent the piece’s choreographed movement. Libby goes on to outline a few other systems of dance notation including the Benesh system, the symbols devised by dancer and choreographer Erick Hawkins, and pianist Joan Hill’s documentation for Leon Collins’s tap dance. For her final example, Libby points to Arthur Murray’s popular publications on social dances such as the waltz, tango, and samba. Murray’s book includes an insert of cutout footprints that prospective dancers can place on the floor when practicing the instructions.

Traveling away from the world of dance, Melissa leads us next to the table of Chris Hartten, assistant head of the Acquisitions & Processing Section, to talk about the work of avant-garde composer George Antheil. In the late 1930s, Antheil See-Note, his own system for musical notation that used an image of the piano keyboard to visually represent notes as bars on vertical staves. Chris describes Antheil as the ultimate composer-inventor who sought to shock audiences with his new industrial sounds and eccentric ideas about music. Antheil took a similarly visual approach to his own life as seen in the scribbles he created for his 1945 autobiography, Bad Boy of Music. 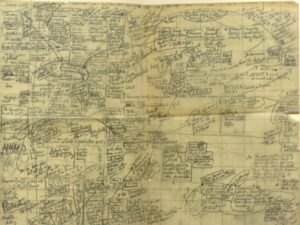 Archivist Jane Cross wraps up our tour as she and Melissa chat about different examples of 20th-century graphic music notation. Jane digs into composer Lukas Foss’s exploration of controlled chance in his chamber work Elytres. She talks through some of the interpretive questions brought up in the multi-disciplinary Lucia Dlugoszewski’s expressive visual score for Wilderness Elegant Tilt, and concludes by considering the colorfully noted circles, squares, and triangles of composer Aurelio de la Vega. Foss, Dlugoszewski, and de la Vega all played with different symbols and markings to represent their creative intentions, thus freeing up performers to interpret works in countless ways. It seems that in music notation, everything is not necessarily as it appears. 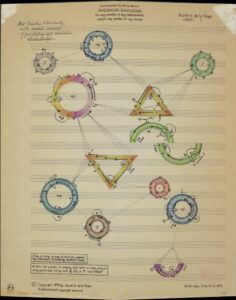 The Library of Congress is now open to researchers by appointment, but anyone unable to travel to DC can check out our tour and get a glimpse of some of the Music Division’s rich visual material from the comfort of your own home. For further information on the collections highlighted, click through to the tour’s resource page.