Lin-Manuel Miranda is releasing a film adaptation of Jonathan Larson’s “tick, tick…BOOM!” this month. In the Muse is publishing a series of four blog posts that connect readers with archival material from the Music Division’s Jonathan Larson Papers. We hope that the sketches, notes, drafts, and other materials we highlight in these blog posts enhance your understanding of Larson the creator, and provide new insight as you prepare to watch the film. The following is a guest post from Senior Music Specialist Mark Eden Horowitz.

In my 30 years at the Library of Congress, a few collections have touched me as deeply and personally as has the Jonathan Larson Papers. Not only touched me but, I think, changed me. Working with Jonathan’s papers—seeing how he lived, and how he worked, and knowing that he died so tragically young—made me want to be a better person and provided models for how to become one. Considering Socrates’s dictum “An unexamined life is not worth living,” I’m struck by how the Jonathan Larson Papers reveal a man who continually examined both his work and his life.

The Jonathan Larson Papers is dense in riches, despite its modest size in comparison to many other Music Division collections, approximately 15,000 items (whereas, for instance, our Leonard Bernstein Collection includes an estimated 400,000 items). But the Larson collection is an intimate one. It’s the work and life of one man on his own, living in a small New York apartment, as opposed to someone with a staff, offices, lawyers, and agents—both a corporation and a creator. It’s all on Jonathan.

His is one of the first collections we acquired where the creator did some of their work on computer, and we have dozens of disks—3 ½-inch and the even older 5 ¼-inch floppies. But there is no lack of handwritten work. Much of it in pencil. Most of Larson’s writings are neat and clear, even with his cross-outs and annotations, but his lyric sketches tend more toward the big and the bold, with sometimes just a few lines scrawled diagonally to fill a page.

There isn’t time to read every page as we’re processing a collection (or we’d never finish). But portions of the Larson Papers consisted of thick folders and envelopes of loose pages, mostly handwritten, and I’ll confess that in neatening them up and dividing them among folders so they weren’t over-packed, I was caught up in much of what I saw. As a result, I noticed many things that might have otherwise escaped my attention, particularly for Rent. One of the things that struck me was how often Larson wrote notes to himself, either posing questions or making assignments (something I don’t recall encountering in any other collection). Examples include: “Clarify that jumping over the moon = taking a leap of faith” and “Write a love scene w/out using the word love” and “Is Mark gay?” and “Make Roger more interesting” and “What if Mark & ​​Benny become one character?” and “What if the whole play were a flashback starting from the moment after the funeral?” Larson wrote biographies of all the main characters in Rent, at least two versions for each as the show evolved. And there are more than two dozen drafts of the script itself, and hundreds of pages of lyric sketches. It’s worth emphasizing here that Larson was a triple threat: composer, lyricist, and librettist—I can think of only two other major musicals with a single person filling all three roles: Frank Loesser with the The Most Happy Villaand Lin-Manuel Miranda with Hamilton.

But this isn’t about Rent. This is about Jonathan Larson himself, and some of what his papers reveal about the kind of person he was.

We have dated one item as circa April 1983—when Larson was 23. He titles it “Ideal Situation.” It’s a numbered list of seven things he’d like to happen. Four of the items revolve around his planned adaptation of George Orwell’s 1984as a musical to actually open in 1984. The timeframe is short and Larson’s ambitions are high:

Culminating in a boxed:

Larson was ultimately unable to get the necessary rights and permissions to adapt 1984but it did plant the seed for his dystopian musical Superbia—set much further in the future. And while Larson never apprenticed with Sondheim, he did receive some advice and guidance from him.

Found among Larson’s notes and sketches for Superbia is a personal statement. In it he clearly lays out a choice he feels he must make. He doesn’t answer the question in writing here, but Rent shows us exactly the choice he made.

I am striving to become a writer and composer of musicals – I am 25 and am faced with a dilemma.

Although I am a sentimental romantic who loves old fashioned musicals I am a member of a very unsentimental unromantic generation, who generally basically think musicals are too corny.

But if I want to try to cultivate a new audience for musicals I must write shows with a score that MTV ears will accept.

If you were me, which audience would you write for? 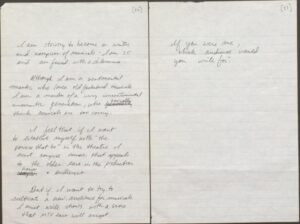 One item that haunts me is his “Schedule.” It’s undated, but it was also found among Larson’s papers for Superbia, placing it between 1985 and 1991. I don’t know how good he was at keeping it, but it tells a lot about the man he was, and suggests even more. First, the fact that he made it at all. One senses that things became real to Larson when they were fixed in words on paper. It made the schedule into a pact or commitment. Every day, Monday through Saturday, up at 10:00, eat, and alternate between a light and a heavy workout. Business is taken care of from noon to 12:30, Monday through Friday. Saturday afternoons are relegated to “House hold things.” He doesn’t specify what they are, but probably laundry and the like. Monday through Friday from 12:30 to 3:30 it’s “write audition or rehearse.” Shower at 3:30. Work from 4:00 in the afternoon until 12:00 am, I presume at the diner. Midnight to 2:00 am “cool off/read.” The block that made me gasp when I first saw it—and continues to move me—is Sunday afternoons where his assignment to himself is “view art.” 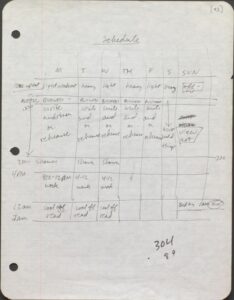 I am deeply affected in the knowledge that Jonathan Larson died without knowing the enormous success and impact his work would achieve. I am reassured knowing that his work will continue to inspire, move, and entertain—as with the upcoming film of tick, tick…BOOM! I know that there are more of his songs and scripts in the Larson Papers at the Library just waiting to be discovered, performed, and enjoyed. I’m also confident that what his papers reveal about his life and how he lived it, will enrich and improve the lives of those who read them.