Rob Houchen is a true modern-day Musical Theater leading man, his CV is one to impress anyone out there with a huge range of work under his belt. He is currently playing the role of Lieutenant Cable in the UK tour of South Pacific after appearing in the production at the Chichester Festival Theatre, the show will also make a stop in the West End when it comes to Sadler’s Wells from the 27th of July to the 28th of August.
His theater credits include South Pacific (Chichester Festival Theater); Marry Me A Little (The Barn Theater); City of Angels (Garrick Theater); The Light in the Piazza (Royal Festival Hall), (Dorothy Chandler Pavilion, Los Angeles) & (Lyric Opera, Chicago); Les Miserables All-Star Concert(Gielgud Theater); Eugenius! (The Other Palace); Broken Wings (Theatre Royal Haymarket); Les Miserables 30th Anniversary (Japan); Titanic (Charing Cross Theatre); Les Miserables (Queen’s Theater); The 12 Tenors (World Wide Events); Godspell in Concert (The Lyric Theater); Candide in Concert (Cadogan Hall) and Peter Pan (Harlow Playhouse).

Television/Film credits include: ‘Tony’ West Side Stories: The Making of a Classic (BBC) and Les Miserables The All-Star Concert (Universal).

South Pacific has just opened at the Manchester Opera House, but we managed to speak to Rob during the rehearsal process. 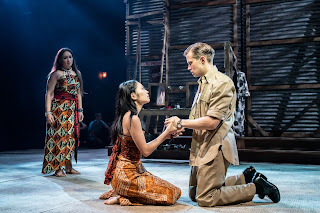 You were part of the South Pacific company when it featured as part of the Chichester Festival Theater 2021 season, how does it feel to be back with this show and touring it as well as bringing it to London’s Sadler’s Wells?

It feels amazing to be back, with so many old faces and new, to bring this great production back to life. I can’t wait to share it with more people.

South Pacific was originally staged in 1949, over 60 years ago. Why do you think it stood the test of time and what makes this particular production relevant to today’s audiences?

Rodgers & Hammerstein were indeed geniuses of their time as they pushed the boundaries of writing in theatre. In this piece there are topics of gender and race that still, so strongly, apply to today and can send important messages to audiences.

Now we can’t interview you and not talk about your history with Les Miserables. Having been part of the show in London, the All-Star concert and even in Japan, do you think there may be a chance we might see you in the show again? Perhaps similar to Bradley Jaden, do you think you would go back as a different part?

Who knows! Les Mis never leaves you! Maybe one day I’ll be a JVJ haha! 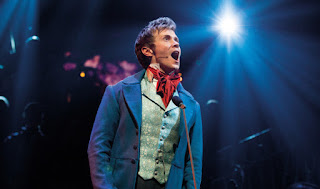 Post-Lock down we saw you in the glorious production of Marry Me A little alongside the fabulous Celinde Schoenmaker, what was it like being part of one of the first handful of shows to reopen theatres?

It was so special. We were so grateful to anyone who decided to come out and watch us in times like they were. And doing that show with my talented best friend made that even more brilliant.

You have had a long working relationship with Schoenmaker, having been in Les Mis together and then A Light in the Piazza to work with her at the Barn Theatre. She’s an extraordinary talent, if you could reunite with her on stage once more what musical theater duo do you think you could play?

Sunday in the Park with George – George & Dot of course!

Last year we saw you perform in your first-ever solo concert, and you also released your own music, after a wonderful career in musical theater what pushed you to do this? Are there any more solo projects in the pipeline?

I loved it and would love to do it again – I have an intimate solo gig at Piano Smithfield on 31st July with a fun theme yet to be announced! Apart from that ill be looking at more writing. 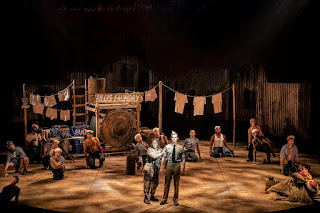 As you look into the next chapter of your South Pacific journey, what venue are you most looking forward to playing?

All of them look amazing. I love Edinburgh, Cardiff & Dublin as I’ve been there a few times. I have heard Canterbury is beautiful so will be nice to end there.

And looking beyond South Pacific, what would you like to do next? Any dream roles you’d like to get your hands on soon?

Who knows – I like to let the world do its thing!

And to finish, in one sentence, why should people come and see you along with your amazing cast in South Pacific?

This show will move you deeply as well as making you laugh and making you think, come see us!

South Pacific is currently playing at the Manchester Opera House until the 23rd of July before coming to Sadler’s wells from the 27th of July through to the 28th of August, it will then head out on a UK tour.